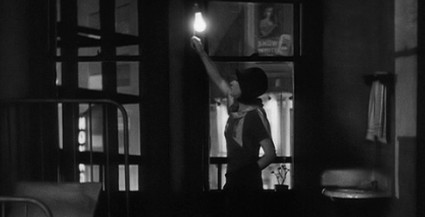 We can still count the number of Blu-Ray silent film releases on the fingers of one hand, so the arrival of number five is an event. It’s F.W. Murnau’s City Girl (1930), now released by Eureka Video. City Girl was Murnau’s last silent, released after Sunrise and the now lost 4 Devils. It is set in the wheatfields of Minnesota, and covers the trials of newly-wedded life for a farmer’s son (Charles Farrell) and a Chicago waitress (Mary Duncan) among the mistrustful farming community.

The Blu-Ray only release is the 1080p high-definition 20th Century Fox restoration of the silent version of the film, with a new score, composed and arranged in 2008 by Christopher Caliendo. There is a full-length audio commentary by David Kalat and a 28-page illustrated booklet with an essay by Adrian Danks.

And what are the other fingers on the hand? As reported on in an earlier post, we already have The General (from Kino Lorber), Sunrise (from Eureka), a selection of early Oz films as extras to The Wizard of Oz (1939) (from Warner Home video), and the unlikely The Story of Petroleum (1923) which is an extra on the Blu-Ray release of There Will be Blood. Releases are promised for this year which will take us up to two hands’ worth: Battleship Potemkin (from a Swedish supplier), and Our Hospitality, Sherlock Jr. and the complete Metropolis (all from Kino Lorber).