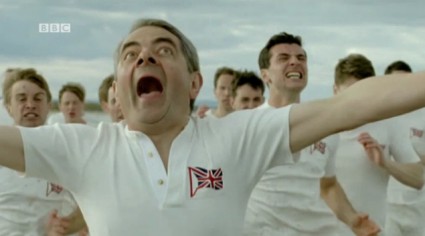 Things are a little quiet at the moment here at Bioscope Towers as all at the scriptorium down their quill pens to follow the London Olympic Games. If we’re not transfixed by our TV screen, then we will be at the Games themselves, and so silent films will probably take a back seat for a while. If you saw the extraordinary ‘Isles of Wonder’ opening ceremony extravaganza devised by filmmaker Danny Boyle you may have spotted its two silent films references: a couple of clips from City Lights during a British film history montage, and (tangentially) Rowan Atkinson in Mr Bean mode playing keyboards for the Chariots of Fire music and winning the race on the sands from Hugh Hudson’s film.

I’ve written some thoughts on the inspiration for the opening ceremony provided by documentary filmmaker Humphrey Jennings over on the Moving Image blog that I write all too occasionally for the British Library: Pandaemonium and the Isles of Wonder.

As for silent films and the Olympic Games, do check out the Bioscope’s updated survey of Olympic film 1900-1928: Let the Games begin.