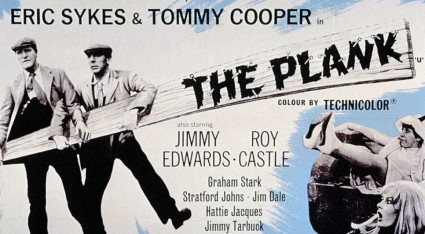 So farewell then to Eric Sykes, one of Britain’s best loved funny men. He was a natural comic performer, generally playing someone confident that he knew what he was doing while demonstrating time and again that he had no reason to be so, best exemplified by the long-running TV sitcom Sykes. He was also one of the most talented comic writers of his time, writing for Educating Archie, Tony Hancock, The Goons, Frankie Howerd and his own shows.

Like many of his generation of comedians, he had an immense affection and respect for the great silent comedians. Some, such as Bob Monkhouse and Michel Bentine, presented compilations of silent comedies on television to bring them to new audiences. Others, such as Ronnie Barker (with A Home of Your Own, Futtock’s End, The Picnic, By the Sea), Benny Hill (The Waiters, Eddie in August), and in recent years Paul Merton, David Schneider (Uncle Max) and Rowan Atkinson (Mr Bean) have continued the tradition, with varying degrees of homage to the past – and with varying success.

Eric Sykes made a number of silent, or near-silent slapstick comedies, of which the most famous and still fondly loved is The Plank, of which three versions were made. It started out as a wordless, black-and-white episode of his BBC TV series Sykes and a …, the episode being Sykes and a Plank (tx. 3 March 1964), in which the two protganists were Sykes and regular co-star Hattie Jacques. In 1967 Sykes remade it as a 54-minute colour cinema release, co-starring himself and Tommy Cooper. This was then re-released in 1974 cut to 45 minutes, before a third version (30mins) was made for Thames Television in 1979, with Arthur Lowe replacing Cooper. It is the 1967 film that is the most familiar.

Sykes (who lived in a silent world himself – he was almost completely deaf) made other silent shorts for cinema and television: Rhubarb (1969, remade as Rhubarb, Rhubarb in 1980) in which the characters utter just the one word (guess what it is), It’s Your Move (1969, remade in 1982), Mr H is Late (1988) and The Big Freeze (1993) among them. But it is The Plank that has retained a classic status of a kind. The story is simple – two builders purchase a floorboard for the house they are working on, and encounter all manner of hazards trying to transport it across town. Judged by the standards of the comedy greats of the 1920s, it is average stuff, but Sykes and Cooper have the right deadpan delivery in the face of absurdity, and in its scenario of an inanimate object geting the better of two men it merits some comparison with Laurel and Hardy’s travails with a piano in The Music Box. The simple plank (much like the large plane of glass) is a silent comedy staple in any case. The twist is that here the plank gets star billing (literally so in the 1967 film’s opening credits).

The Plank and its creator show a continuity of laughter down the years. Slapstick itself no longer has the popular appeal that it once enjoyed, but Chaplin, Keaton, Lloyd et al (themselves inspired by an earlier generation of theatre comics) inspired the next generation of comedians such as Eric Sykes who flourished on radio and television, whose works then made the next generation laugh when young and inspired them to make others laugh in their own time (as the many affectionate tributes to Sykes from today’s comedians has demonstrate). It’s a continuous process of inheritance and gratitude. Comedy dates, but laughter is eternal. Thank you Eric.