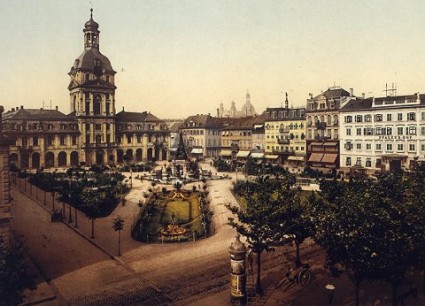 One of the very first scholarly theses to be written about the cinema, Emilie Altenloh’s Zur Soziologie des Kino: Die Kino-Unternehmung und die Sozialen Schichten Ihrer Besucher (A Sociology of the Cinema) (1914) has proven to be of lasting worth. Altenloh’s study of the habits of cinemagoers in Mannheim, Germany has greatly grown in reputation in recent years, partly because her interest in the social drivers behind the popularity of cinema anticipate modern interests and concerns, and partly because of the increase in studies of cinema as social space generally.

So it is welcome that the German publishing initiative KINtop (which produces both volumes of essays and single volume studies) has republished Zur Soziologie des Kino together with background articles on Altenloh, the influence on her of sociologist Alfred Weber, cinema in Mannheim in 1912/13 (the period of her study), and the rediscovery of her study since the 1970s and the great influence that it has had since. The study and accompanying articles are in German, but for English readers you can find part of the essay published as ‘A Sociology of the Cinema: the Audience,’ in Screen, vol. 42 no. 3, Autumn 2001. The original German text can also be found online via the Massenmedien.de site. It is in two parts: part 1 on production; part 2 on audiences and reception.

Emilie-Kiep Altenloh (1888-1985) was a politician and economist with strong social welfare interests, who served in the Bundestag 1961-1965. She conducted her famous study for her doctoral dissertation (University of Heidelberg), inviting 2,400 cinema-goers in Mannheim to fill in questionnaires as to their gender, age, social standing, marital status, employment, religious persuasion, politics and filmgoing habits. It is not an extensive questionnaire, and its preoccupation with class (specifically trying to understand the behaviour of the working classes) is typical of the time. But Altenloh has a sharp economist’s eye for the industrial structures and the profound relationship between producer and consumer that underpinned cinema, while dispaying great interest in (and sympathy for) the audiences themselves. She frets over evidence of a lack of political engagement, and worries over how much the cinema may or may nor contribute to an increase in musical taste – typical concerns of her class and trade – but the picture her text supplies of society responding to cinema, and reflected through cinema, is a powerful one.

There were other studies of the cinema by sociologists at this time, though few have the depth of understanding Altenloh shows, and too many reveal strong prejudice against a working class wasting time which could be more profitably spent in art galleries or public parks. Examples covered in these pages before now (and the original texts of which can be found for online) are: