How many people writing on early film know about this? Using a bit of lateral searching on the Internet Archive, I found How workingmen spend their time, a doctoral thesis by one George Esdras Bevans, submitted at Columbia University in 1913. I’ve not come across it before, and it seems few film histories refer to it, yet it is a marvellous source of information on cinema-going, audience leisure tastes, and the relationship of earnings and work-time to leisure, with a wide range of evidence demonstrating the prime position of cinema in the public mind just before the First World War.

Here’s the author’s description of his methodology:

This investigation has been undertaken in order to determine how workingmen spend their leisure hours. On the suggestion of Dr. Franklin H. Giddings, Professor of Sociology, Columbia University, the questionnaire method was adopted and a time schedule prepared. The investigation was begun in February, 1912.

More than 4,000 schedules were distributed among workingmen thru the agency of Labor Unions, Clubs and Churches; but altho much interest in the study was manifested, only 113 properly filled out schedules were returned, and these were considered too
few in number to serve as a basis for any general conclusions.

In the Fall of 1912 the Bureau of Social Service of the Home Mission Board of the Presbyterian Church became interested in the study and agreed to engage investigators to interview workingmen in order to secure a sufficient number willing to answer the questions. This investigation began on November 1st, 1912, and was completed on February 3rd, 1913.

Schedules to the number of 868 were returned by the paid investigators. In addition 31 schedules were obtained as the result of a Workingmen’s Mass Meeting held November 12th, 1912, at the Labor Temple, 14th Street and 2nd Avenue, New York City. By February 3rd, 1913, 1,012 schedules had been secured from New York City, 10 from Rochester, N.Y., and 5 from Utica, N.Y. After the tabulation had been partly completed 43 schedules were received from other cities and were used in the closing part of the study relating to Expenditure of Money. Altogether, 1,070 schedules were returned, and these serve as a basis for the present study.

Bevans then goes into great detail, describing the processes he took, the particular statistical method employed, and the resistance that he sometimes received (questions were asked, “Who is back of the study?” “What capitalistic scheme is this?” “Why not investigate the employers and see how they spend their spare time?”). He also provides the questions asked and the forms supplied. The main body of the text is tables with accompanying analysis, under such headings as ‘The Relation of Occupation to the use of Spare Time’, ‘The Relation of Wage to the Use of Spare Time’, and ‘What Men Usually Do on Certain Hours and During Certain Hours’.

As an example, here’s is one of the the tables accompanying the heading ‘The Relation of Hours of Labor to the Use of Spare Time’:

This isn’t the place to go into a detailed analysis of the data, but essentially one finds that whatever the working man’s circumstances, his hours of work or his earnings, the motion picture was the favoured way of spending one’s spare time. This might be expected, but it is invaluable to see the assumption tested against other leisure options, the availability of free time, and the means to pay for it. Here’s a table on the relationship of age to spare time: 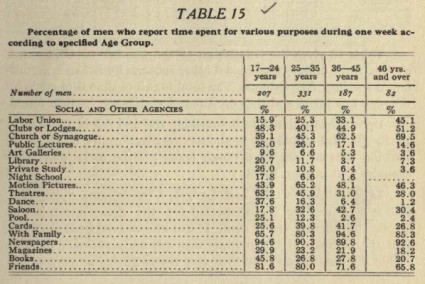 OK, not everyone interested in silent cinema is going to be that engrossed by statistics, but the sociology of early cinema is still a grievously neglected subject, and if we don’t relate the films to th people who saw them, its hard to say what we are doing investigating early films at all.

There were other such early sociological studies. The most notable is Emilie Altenoh’s study of film audiences in Mannheim, Germany over 1912/13, published as Zur Soziologie des Kino: Die Kino-Unternehmung und die Sozialen Schichten Ihrer Besucher (1914), part translated as A Sociology of the Cinema in Screen, vol. 42 no. 3, Autumn 2001. I hear tale that a full translation into English is underway. Another is M.M. Davis’ The Exploitation of Pleasure: A Study of Commercial Recreation in New York City (1911). There is always something a little unsettling about people being studied anatomically in this way – and generally working-class people. What seemed irrational or in need of explanation (and then control) by elites, seemed wholly rational to those enjoying the experience. But we still have to be glad that such studies were done. As Bevans’ data amply proves, watching movies was, quite simply, a good way of spending your time.

Into the Bioscope Library it goes.