August 6, 2007 By urbanora in Performers, Poetry

It’s been a while since we had poetry on The Bioscope. So, to make up, here are three poems by Vachel Lindsay (1879-1931), who if not quite the poet laureate of the silent cinema was undoubtedly the poet at the time most drawn to the medium. For film historians, he may be best known as the author of The Art of the Motion Picture, a somewhat high-flown early stab at film theory, published in 1915 and still in print.

But Lindsay is best known for his poetry, with its jazz-inflected rhythms and contemporary themes. He wrote three poems on actresses who appeared in Biograph films before the First World War: Blanche Sweet, Mae Marsh and Mary Pickford. “I am the one poet”, he wrote, “who wrote them songs when they were Biograph heroines, before their names were put on the screen, or the name of their director”. That’s probably not strictly true, since he had to know their names to be able to put them in the titles of the poems, but nevertheless the poems are at one with his treatment of the moving picture as an art form.

Anyway, here they are: one interesting, one quite good, and one a little nauseating.

Beauty has a throne-room
In our humorous town,
Spoiling its hob-goblins,
Laughing shadows down.
Rank musicians torture
Ragtime ballads vile,
But we walk serenely
Down the odorous aisle.
We forgive the squalor
And the boom and squeal
For the Great Queen flashes
From the moving reel.

Just a prim blonde stranger
In her early day,
Hiding brilliant weapons,
Too averse to play,
Then she burst upon us
Dancing through the night.
Oh, her maiden radiance,
Veils and roses white.
With new powers, yet cautious,
Not too smart or skilled,
That first flash of dancing
Wrought the thing she willed:-
Mobs of us made noble
By her strong desire,
By her white, uplifting,
Royal romance-fire.

Though the tin piano
Snarls its tango rude,
Though the chairs are shaky
And the dramas crude,
Solemn are her motions,
Stately are her wiles,
Filling oafs with wisdom,
Saving souls with smiles;
‘Mid the restless actors
She is rich and slow.
She will stand like marble,
She will pause and glow,
Though the film is twitching,
Keep a peaceful reign,
Ruler of her passion,
Ruler of our pain!

The arts are old, old as the stones
From which man carved the sphinx austere.
Deep are the days the old arts bring:
Ten thousand years of yesteryear.

She is madonna in an art
As wild and young as her sweet eyes:
A frail dew flower from this hot lamp
That is today’s divine surprise.

Despite raw lights and gloating mobs
She is not seared: a picture still:
Rare silk the fine director’s hand
May weave for magic if he will.

When ancient films have crumbled like
Papyrus rolls of Egypt’s day,
Let the dust speak: “Her pride was high,
All but the artist hid away:

“Kin to the myriad artist clan
Since time began, whose work is dear.”
The deep new ages come with her,
Tomorrow’s years of yesteryear. 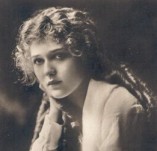 To Mary Pickford: Moving-Picture Actress
(On hearing she was leaving the moving-pictures for the stage)

Mary Pickford, doll divine,
Year by year, and every day
At the moving-picture play,
You have been my valentine.

Once a free-limbed page in hose,
Baby-Rosalind in flower,
Cloakless, shrinking, in that hour
How our reverent passion rose,
How our fine desire you won.
Kitchen-wench another day,
Shapeless, wooden every way.
Next, a fairy from the sun.

Once you walked a grown-up strand
Fish-wife siren, full of lure,
Snaring with devices sure
Lads who murdered on the sand.
But on most days just a child
Dimpled as no grown-folk are,
Cold of kiss as some north star,
Violet from the valleys wild.
Snared as innocence must be,
Fleeing, prisoned, chained, half-dead –
At the end of tortures dread
Roaring Cowboys set you free.

Fly, O song, to her to-day,
Like a cowboy cross the land.
Snatch her from Belasco’s hand
And that prison called Broadway.

All the village swains await
One dear lily-girl demure,
Saucy, dancing, cold and pure,
Elf who must return in state.