Electric Salome is the title of a recent book by Rhonda K. Garelick, which is her term to describe Loïe Fuller (1862-1928), one of the key performance artists of the late-19th/early 20th centuries. Fuller was a pioneer of modern dance, who made use of modern stage technologies of lighting and colour to create startling visual effects, particularly through her Serpentine Dance, where her swirling dresses combined with changing colour lighting to create haunting, phantasmagorical effects. She was beloved by artists and poets – Mallarmé, Toulouse-Lautrec, Rodin – and became the subject of early filmmakers.

Garelick’s book is strong on Fuller’s position as a figure of modernism and as a key figure in modern dance. It is, however, disappointingly weak on her early film appearances, reducing mention of these to a misleading footnote. There is much confusion over Fuller’s early film work, as she had many imitators – on stage and on film – and early films of skirt dancers are often mistakenly identified as her (see, for example, the site www.edisonfilm.com, which erroneously claims to show Fuller in a Edison film, though she never made a film for Edison).

For the record, these are the known films that were made of (or by) ‘La Loïe’: 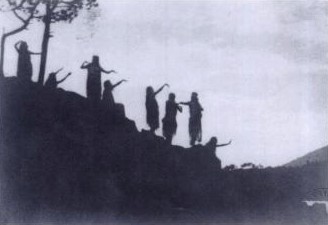 Garelick has a little more to say about the later titles (only Le Lys de la vie survives among them). They were made by Fuller and her lover Gabrielle Bloch. The feature-length Le Lys de la vie sounds to be an extraordinary work – based on a story by Queen Marie of Romania, a combination of fairy tale and dance themes telling the story of two princesses competing for the love of a prince, played by René Clair, no less. Fuller herself directed but did not appear in the film, which seems to have been characterised by innovative cinematographic effects (such as incorporating negatives for some ghostly effects) mixed with conventional fairy tale elements.

Garelick tells us less about the other two, lost films. Apparently they were not completed, and were presumably semi-professional productions. It is likely that Fuller did not appear in them either (certainly not as a dancer – she was in her mid-60s, and died in 1928).

Loïe (not Loie as Garelick’s book has it throughout) Fuller was an iconic figure who continues to attract much scholarly interest. There’s a useful set of links about her on the Great Dance Weblog. As indicated above, films exists of her many imitators. She refused to be filmed by Edison, but the Edison studios did make films of other dancers in the 1890s, such as Ruth St Denis, Amy Muller and especially Annabelle, whose several Kinetoscope skirt dance films were clearly in imitation of Fuller and were often mistakenly (deliberately or otherwise) promoted as being films of Fuller herself.

Loie Fuller is a gorgeous-looking site which accompanies the book Traces of Light: Absence and Presence in the Work of Loïe Fuller, by modern Fuller imitator/acolyte Ann Cooper Albright.

Garelick’s book is a fine, insightful study with a strong theoretical basis, but as ever the facts about films are not just scanty but are not recognised as having any importance. The confusion that Fuller’s supposed film appearances created at the time persists, and she exists in those skirt films that survive more often as a guiding spirit than the woman herself.