November 19, 2007 By urbanora in Publications 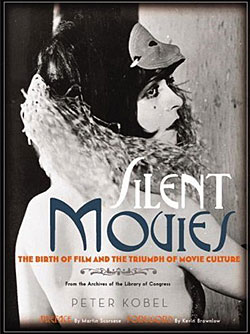 It’s not published in the UK until 6 December, but just in case you were thinking about writing that letter to Santa, you might want to add Peter Kobel’s Silent Movies to the list. This is a deluxe history of the genre, grandolinquently subtitled ‘The Birth of Film and the Triumph of Movie Culture’, and has been five years in the making. It accompanies a Library of Congress touring programme, and it gets a preface by Martin Scorsese (what doesn’t these days?) plus an introduction by Kevin Brownlow, which should be stamp enough of approval for anyone. I’ll post something here once I’ve actually got my hands on a copy, but meanwhile the book has been published in the USA already, and generated a lot of comment. Here are some related links:

The Library of Congress press release for the book.

An interview with Kobel (an arts and entertainment journalist) on readexpress.com.

Richard Schickel’s rather jaundiced review of the book for the Los Angeles Times.