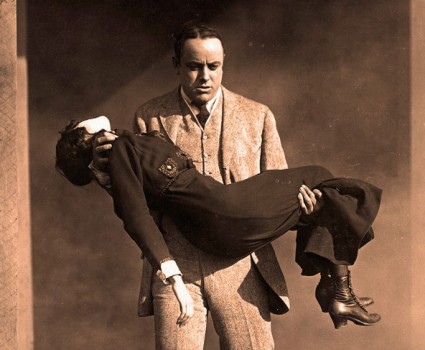 Here’s a couple of websites to bring to your attention, each dedicated in one way or another to the Triangle Film Corporation. Triangle was formed in 1915 following a parting of the ways between the brothers Harry and Roy Aitken and other board members at the Mutual Film Corporation. Harry Aitken formed the Triangle Film Corporation in July 1915 with the plan of releasing the films of three prominent producers: D.W. Griffith, Thomas Ince and Mack Sennett. For three years it was a considerable force in American film production before it was dissolved, brought down in part by the huge costs of Intolerance – ironically enough, given that it was formed on a tide of optimism and finance that followed the great success of The Birth of a Nation.

The first site is The Harry & Roy Aitken Collection, created by the Wisconsin Center for Film & Theater Research, Madison. The WCFTR holds the papers of the Aitken brothers, comprising scripts, photos, promotional materials, company ledgers, legal records, and both personal and business correspondence. The site exhibits documents from one part of the collection, the Scripts and Scenarios series, using selected digitised documents to illustrate the great changes that took place in American film practice in the 1910s.

From the continuity script for Love of Justice? (working title The Woman of It) (1917)

The site comprises a timeline of developments in cinema in the 1910s; and a summary history of such developments, focussing on such key aspects as the arrival of feature films, the formation of exchanges, the distribution of features, and their exhibition. The central section is Continuity Script and the Rationalization of Film Production, which illustrates its historical thesis with digitised documents showing examples of Proof of Copyright, Detailed Scenario, Credits and Condensed Story, Locations, List of titles, Continuity Script Excerpt, Complete Picture Report and Budget Summary, all of them for Triangle releases. Another section, Changes in Film Style in the 1910s, demonstrates changes in lighting, staging, performance, editing and cinematography films at the start and end of the decade, with clips and stills as illustration. Finally there’s a case study based on The Clodhopper (1917), directed by Victor Scherzinger for Kay-Bee and released by Triangle, with a clip from the film and its matching continuity script. 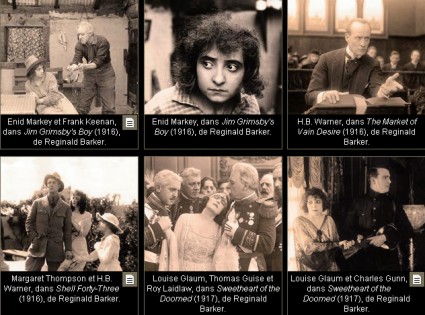 Even if you don’t read French, the gallery of photographs alone is gorgeous to look at, and both sites are properly scholarly and just a little bit enthusiastic about their their subject, which is not just Triangle but the extraordinary way in which American film production stylistically and structurally evolved, matured and conquered the world over the period of the 1910s.

My thanks to Andrew Comiskey for alerting me to both sites.