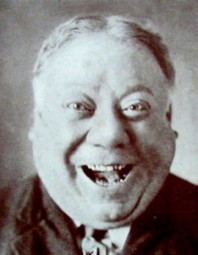 A few years ago, I was sent a catalogue by the photographic agency, Corbis. Among its many images denoting emotions, there was one of a portly, middle-aged man with bright beaming face, categorised under something like ‘surprise’ or ‘happiness’. The person had no further identification. The photograph was of John Bunny, once arguably the most popular and recognised person worldwide, now reduced to complete anonymity.

I can’t find the photograph now on the Corbis web site (which does have one picture of Bunny identified as him). So maybe someone discovered the injustice. I hope so. For John Bunny really was the most popular of silent stars in his day, and the way in which his popularity has so dramatically faded ought to be a lesson to anyone whose head gets turned by the notion of celebrity.

John Bunny (1863?-1915) was the son of a British naval officer who settled in New York, where his son ran away from home to join a minstrel show and then became a stage actor and director. In 1910 he turned to the movies, joining the Vitagraph Company, and almost instantly became a star. He portrayed a rotund, merry, earthy figure, whose genial manner and aptitude for comic characterisation, sometimes touched with pathos, endeared him to millions. He appeared in over 200 shorts between 1910-1914, with such titles as Bunny Buys a Harem, And His Wife Came Back and Bunny’s Honeymoon. He was often teamed with the comically angular Flora Finch. He made some films in Britain in 1913, including Pickwick Papers (he was a natural Mr Pickwick), scenes from which were filmed just around the corner from where I am typing this now. His death in 1915 made headlines around the world.

Why mention Bunny now? Simply because of yesterday’s post with the Vachel Lindsay poems, for there is one last poem by Lindsay on the film stars of the early cinema period which I haven’t given you as yet. It’s the second part of a two-part sequence, the first of which commememorates the actor Edwin Booth, renowned for his performance as Hamlet. For the second part, Lindsay laments the death of John Bunny as if he were Yorick, Hamlet’s fool:

In which he is remembered in similitude, by reference to Yorick, the king’s jester, who died when Hamlet and Ophelia were children

Yorick is dead. Boy Hamlet walks forlorn
Beneath the battlements of Elsinore.
Where are those oddities and capers now
That used to “set the table on a roar”?

And do his bauble-bells beyond the clouds
Ring out, and shake with mirth the planets bright?
No doubt he brings the blessed dead good cheer,
But silence broods on Elsinore tonight.

Hamlet himself could not give cheer or help,
Though firm and brave, with his boy-face controlled.
For every game they started out to play
Yorick invented, in the days of old.

The times are out of joint! O cursed spite!
The noble jester Yorick comes no more.
And Hamlet hides his tears in boyish pride
By some lone turret-stair of Elsinore.

Bunny died of liver failure on 26 April 1915. Today, only a handful of his films survive: A Cure for Pokeritis, Bunny at the Derby, The Pickwick Papers, Bunny all at Sea, Her Crowning Glory, The Wooing of Winifred, and a few more. In truth, his real comic appeal died with him, and it is worth seeing Bunny at Sea for its scenes taken on board a ship where real life passengers laugh delightedly at Bunny’s antics, giving us some indications of the roots of his popular appeal.

Vachel Lindsay wrote evocatively of the first Bunny picture that he saw:

It is a story of high life below stairs. The hero is the butler at a governor’s reception. John Bunny’s work as this man is a delightful piece of acting. The servants are growing tipsier downstairs, but the more afraid of the chief functionary every time he appears, frozen into sobriety by his glance. At the last moment this god of the basement catches them at their worst and gives them a condescending but forgiving smile. The lid comes off completely. He himself has been imbibing. His surviving dignity in waiting on the governor’s guests is worthy of Goldsmith and Sheridan. The film should be reissued in time as a Bunny memoiral.

Whichever title it might be, it’s a lost film now…