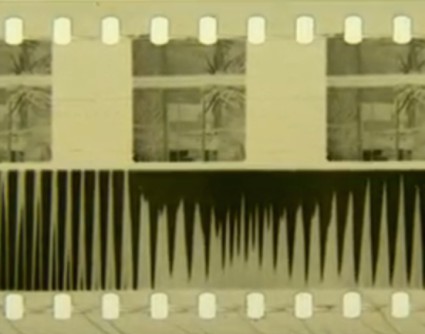 Strip of Eugene Lauste sound film c.1912, with the soundtrack running along the bottom, from http://video.pbs.org/video/1529729774

Here’s notice of a rather interesting item in the PBS television series History Detectives. The programme is a popular history series in which the presenters go off on quest for answers to some historical conundrum or other, and in the first item of the programme the presenter encounters a collector, Rocky Accetturo, who has bought some personal papers relating to Eugene Lauste in an estate sale. Lauste (1857-1935) was a brilliant French technician who worked for Thomas Edison alongside W.K-L. Dickson working on some of the very first American films, before moving with Dickson to American Biograph. 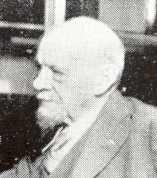 Having been instrumental in constructing a number of the first motion picture film devices, Lauste became fascinated by the possibilities of adding sound to film. Edison had already produced the Kinetophone in 1895, in which Kinetoscope films were supposedly synchronised with Phonograph recordings (in reality it was just music played alongside films of marching bands etc. without any proper synchronisation). Several other inventors around this time attempted to match sound with film in similar fashion, notably Clément-Maurice, Henri Lioret, Henri Joly, François Dussaud and Léon Gaumont. Lauste went one step further and – while working in Britain – patented in 1907 as “A New or Improved Method of and Means for Simultaneously Recording and Reproducing Movements and Sounds“. Here the sound was to be recorded optically and produced alongside the images on the film strip. He continued with his experiments, and between 1910-1913 shot some experimental sound films in the garden of his Brixton home. However Lauste failed to find the financial backing he required, possibly on account of his own intransigence, and it would not be until the 1920s, and particularly the work of Lee de Forest, that sound on film would start to become a reality.

The programme concerns a strip of Lauste sound film which the collector found among the papers. The detective story follows the familiar track for this sort of programme, with their primary source of information appearing to be Wikipedia, but it does get better one they start speaking to archivists about the film strip. We hear the sound reproduced (one second of it, possibly of a mechanical process, maybe the sound of the camera itself) and get to meet Biograph and Lauste authority Paul Spehr, who also shows us the Edison ‘Black Maria’ studio. Finally we discover that a similar short strip of film is held by the Smithsonian, though Accetturo’s is marginally longer, and that his film probably dates from c.1912.

The item runs for some fifteen minutes and is the first item on the programme. It makes some errors (The Jazz Singer wasn’t sound-on-film) and the pseudo-dumb questioning is a bit grating, but it gets better as it goes along and the technology it demonstrates – old and new – is fascinating.

Thanks therefore to PBS for putting up a programme that those of us in the US would not have had the chance to see otherwise, and all in all its a reminder that through the silent era there was this urgent quest to marry film images to recorded sound. Synchronised sound, sound provided by musicians, sound effects, sound produced by lecturers, sound provided by performers behind the screen or to the side of the screen, and then assorted steps towards commercialising sound on film itself. The silents began digging their grave, right from the beginning.

The full History Detectives programme can be seen on the PBS site and the script can be read here. But what is Rocky doing with the rest of the papers on show – letters, cuttings, patents?