May 31, 2007 By urbanora in Audience, Censorship, Children, Publications, Social themes 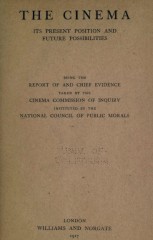 There are so many interesting and valuable texts in the silent cinema field being added to the Internet Archive, but this latest addition to the Bioscope Library is perhaps the most exciting and important yet.

The Cinema: Its Present Position and Future Possibilities (1917) is a report and summary of evidence taken by the Cinema Commission Inquiry, instituted by the National Council of Public Morals. Essentially, it is a thorough investigation into the cinema in Britain and what its effects might be on the viewing public. As the introduction states, the National Council on Public Morals was “deeply concerned with the influence of the cinematograph, especially upon young people, with the possibilities of its development and with its adaptation to national educational purposes”. In other words, many in authority were alarmed at the popularity of cinema among those it deemed dangerously impressionable, and they wanted better to understand it, and to establish greater control over it. But they also wanted to find out what was best about it, and to replace hearsay with evidence.

The Commission was led by the Lord Bishop of Birmingham, and comprised assorted religious, educational and political figures, representatives from the film trade, T.P. O’Connor from the British Board of Film Censors, and others, including Dr Marie Stopes representing the Incorporated Society of Authors, Playwrights and Composers. The Commision sat from January to July 1917. Its terms of reference were:

The detailed report that was published is an unmatched treasure trove not only of opinions, fears, hopes and prejudices regarding the cinema and its audience, but of evidence relating to the production and exhibition of films in Britain at this time. Those supplying evidence included Cecil Hepworth, J. Brooke Wilkinson, A.E. Newbould, Gavazzi King and F.R. Goodwin, all key figures from the film industry, teachers, policemen, magistrates, social workers, and children.

The report is of importance in three areas in particular. First, for what it reveals of attitudes – positive as negative – towards the cinema from society’s moral guardians, for which there is much fascinating verbatim evidence, in the questions they ask as well as in the answers received. There are many questions about the supposed corrupting influence of cinema, and some heartening replies, such as this from J.W. Bunn, a headmaster from Islington:

A considerable number of people look upon the attendance of children at cinematograph entertainments with dislike if not with horror, and are apparently inclined to accuse the picture shows of being the main cause of juvenile misdemeanours. I do not agree with this view, and am firmly convinced that there is great exaggeration committed by this class. In my opinion these people are always to be found on the side of opposition of popular and cheap amusements for the working classes. The picture show is undoubtedly very popular with the women and children of the working class, but then it is still new enough to be a novelty, and it must be remembered that no other form of entertainment has ever offered to the poor the same value in variety and comfort for a very small outlay.

Secondly, there is invaluable statistical evidence provided by the film trade, including numbers of cinemas nationally, seats occupied, prices, investment in the cinema industry and the amount of film in distribution. Much of this data is unique to the report.

Lastly, there is the evidence from the school children about their cinema-going habits. Probably uniquely for this period in British film, we have the words of the audience members themselves. Here’s a revealing exchange between the Chairman and four boys from Bethnal Green (two aged eleven, two thirteen):

Q. What do you like best at the cinema ?
A. All about thieves.
Q. The next best?
A. Charlie Chaplin.
Q. And you?
A. Mysteries; and then Charlie Chaplin.
Q. And you?
A. Mysteries, and Charlie Chaplin.
Q. What do you mean by mysteries?
A. Where stolen goods are hidden away in vaults so that the police can’t get them.
Q. And you?
A. Cowboys; and then Charlie Chaplin second.
Q. When you have seen these pieces showing thieving and people catching the thief, has it ever made you wish to go and do the same thing?
A. Yes.
Q. Do you think the fellow who steals, then, a fine man?
A. No.
Q. But you would like to do it yourself?
A. Yes.
Q. Do you like the adventure or what?
A. I like the adventure.
Q. You have no desire, then, to steal in order to get things for yourself, but you like the dashing about and getting up drain-pipes and that sort of thing?
A. Yes.
Q. And you?
A. No, I don’t like that, I should not like to do that.
Q. Do you like pictures where you see flowers growing?
A. No.
Q. Do you like ships coming in and bringing things from distant lands?
(One boy replied ” No,” and the other three ” Yes.”)
Q. You like to have a consistent programme of detective stories and Charlie Chaplin, and you don’t want any more?
A. Yes.
Q. Do you sit amongst the girls?
A. Sometimes.
Q. What do you pay?
A. Id. and 2d.
Q. Do you ever have to sit on the ground?
A. No, we always have a seat.
Q. Have you ever seen the boys behave roughly to the girls?
A. Yes.
Q. What do they do?
A. Aim orange peel at them.
Q. Do they pull the girls about?
A. Yes, their hair.
Q. And do the girls pull back again?
A. No; they seem to enjoy it.

The Report was generally favourable towards the film industry, which was delighted to receive such vindication of its work. The Report recommended the implementation of a system of official censorship, superseding that of local authorities, but this was not implemented.

It’s a marvellous document, and I strongly recommend it to anyone interested in early British film or the social history of film. It’s available for download from the Internet Archive in DjVu (28MB), PDF (69MB), black-and-white PDF (21MB), and TXT (1.3MB) formats (the latter essential for word searching).