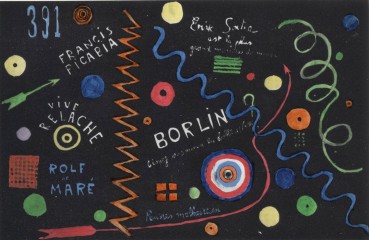 The first details of this year’s Giornate del Cinema Muto (the Pordenone Silent Film Festival) have just been published.

The festival is taking place at Pordenone itself (after several years at the nearby town of Sacile), 6-13 October. Festival features announced (provisionally) so far are:

May 7, 2007 By urbanora in Colour, Filmmakers, Technology

As reported earlier, I’ve been reading Simon Ing’s The Eye: A Natural History, which is not only an exceptional, highly-readable account of the mysteries and mechanics of eyesight, but incidentally has information of use to us in the study of early film. I’ve already covered his demolition of the persistence of vision fallacy. A later chapter covers how we see colour.

Silent cinema was filled with colour. From the earliest years selected films were hand-painted, a process that was then mechanised by a system of stencils (and massed ranks of women operatives) by the Pathé and Gaumont companies. Later films were subtly tinted and toned throughout, with colours used to denote emotions as well as settings. Restorations of sophisticated colour effects in silent films are the pride and joy of film archives. There is an excellent essay by Tom Gunning, ‘Colorful Metaphors: The Attraction of Color in Early Silent Cinema’ which places early, artificial colour within the broader context of colour reproduction across other media.

However, there was also ‘natural’ colour in the silent era. The 1920s saw systems such as Prizmacolor and two-colour Technicolor in use for a handful of films, but the first of them, and the colour system with the most romantic history, was Kinemacolor. You can read all about the history of Kinemacolor, which was invented in 1906 and first exhibited in 1908, on my Charles Urban website, Urban being the entrepreneur behind Kinemacolor.

The relevance of Ings’ book here is his account of the work of Edwin H. Land. Land was an American scientist and inventor, best known for having given us the Polaroid camera. In 1959, Land devised an experiment which challenged previous theories of colour vision. This is how Ings describes the initial discovery:

On evening, at the end of a long series of experiments with three projectors [they were experimenting with red, green and blue light], Land and his assistants shut off their blue projector and took the green filter out of the green projector. Then, one of Land’s assistants, Meroe Morse, called their attention to the screen. The red projector was still running, projecting the red record on the screen in red light, and the unfiltered green projector was projecting the green record with white light. That combination of red and white lights should, in Morse’s mind, produce something pinkish. But there was the original image, its every colour still identifiable. How could red and white lights throw blues and greens on the screen?

Answer – because in colour vision, context is everything. The eye perceives colours in relation to other colours, and even though Land and his team ‘removed’ colour filters in assorted combinations, they could still generate a full colour, projected image. The eye filled in the gaps.

This property of vision, however, had been discovered and exploited fifty years earlier by Charles Urban and G.A. Smith, the inventor of Kinemacolor. Kinemacolor (patented 1906) used rotating red and green filters on both camera and projector, with panchromatic black-and-white film being used at double the conventional speed (i.e. around 32 frames per second). The result, despite some colour fringing inevitable given the separation of the red and green records, produced a record that was remarkably close to full colour. Red and green in combination covered a fair bit of the spectrum, and the eye did its best to fill in the rest. Hence eye-witnesses reported seeing blues which, according to pure Newtonian colour theory, could not be there. Ironically, Kinemacolor eventually failed as business after a 1913 court case in which its patent was ruled invalid because it claimed to show all the natural colours, but could not reproduce blue.

Today, few Kinemacolor films survive, and we can in any case only judge (or be fooled by) the colour effect if a true Kinemacolor film is projected using correct equipment. However, it is possible to approximate the effect photo-chemically or electronically, as in these frames from the surviving fragment of the famous Delhi Durbar film of 1912 (‘red’ record, ‘green’ record and composite effect):

Land knew nothing of Kinemacolor, and Ings makes no mention of it, which is a shame, because its history has much to tell us about perception, the socio-psychological construction of colour, and the wider understanding of the phenomenon of moving pictures.

If you are interested in knowing more about the history of Kinemacolor, why not download the chapter from my thesis on Urban which covers Kinemacolor, available from my personal website.

If you are heavily into optics and want to know more about Land’s work, see Gerald Huth’s Rethinking the Vision Process blog.

And, if you are in a UK university, college, school or public library, you can see sample Kinemacolor films from the BFI’s Screenonline site, together with other examples of Charles Urban’s remarkable film career.

Back to our on-going series on how to set up your own cinema, taken from the publication How to Run a Picture Theatre (c.1912). Having got the building and equipment all prepared, the staff recruited, it is time to select the films we are going to show and to decide how we are to present them:

The Programme. In the selection of the program, the tastes of the locality in which the show is situated is the governing factor. Films that will please the audience of a theatre located in a neighbourhood made up of the labouring classes will not gain favour in a house situated in a high grade residential district, but it is surprising how well the films that please in the exclusive neighbourhood are received by the lower classes. I refer to high class subjects, such as classic romantic dramas, travel subjects etc. Theatre owners will do well to cultivate the taste of their audiences by gradually increasing the number of high class film subjects, thus cutting down the demand for some of the rubbish sold as comics …

Proper film selection is really a system of insurance. It is the best policy of protection against competition and loss …

The shame or embarrassment that many cinema owners had for their lower class audiences is noticeable throughout the literature of this period. There was an insistent drive towards higher-class presentation, in venue as well as in the films. This was partly a strategy to attract a more genteel clientele which would pay more for tickets, of course, but also just a general wish for ‘class’. Nevertheless, it is odd to see the dismissal of ‘rubbish’ comics which were the bread-and-butter entertainment for so many cinemas.

Sunday Selections. … the films shown on that day should differ from the general run on week days. They should be of a more sacred and educational character …

The question of Sunday shows was hugely controversial at the time. The audience was naturally interested in finding cheap entertainment available on what was generally its one free day of the week, while others were shocked at the idea of entertainment – and particulaly such vulgar entertainment – on a Sunday. Many cinemas put on special Sunday shows of a more ‘suitable’ character to overcome such censure, and to protect their licence. It was common for these to give the profits from Sunday shows to charity.

First Runs and Repetitions. “First runs” faddism was born of a desire to compel the other fellow to follow suit. The “first-run” fiend figured that if he could get the newest picture first he would kill it for future use in his town, and that those who came next would just be “imitators” …

There is a mistaken idea among picture theatre managers that if a picture has been once run in a town, it is useless to show it again.

Keeping Track of Films. The card system should be adopted for keeping track of films, both coming releases and films that have been had from the renter …

The Kinematograph and Lantern Weekly was one of the main British film trade papers (its big rival was The Bioscope, of course), and the publisher of How to Run a Picture Theatre.

How to Make Feature Films Money Earners. Feature films may be divided into two classes, firstly those running well into 3,000 feet or over, such as Vitagraph’s “Tale of Two Cities”, or “Vanity Fair”, Nordisk’s “In the Hands of Impostors”, Selig’s “Christopher Columbus”, Jury’s “Lady of the Camelias”, E.S. Williams’ “Carmen”, or Clarendon’s “Saved by Fire”, and secondly those of 1,000 feet, such as Selig’s animal pictures, B. and C.’s “Lieut. Daring” and Clarendon’s “Lieut. Rose”, or Vitagraph’s Life Portrayals.

A fascinating selection of what were considered strong sellers in 1912. American productions predominate, but there is still some merit seen in the output of British producers British and Colonial (B. & C.) and Clarendon. In the Hands of Impostors was a sensational ‘white slave’ melodrama from Denmark. The 3,000-foot film (50 minutes or over) indicates that the feature film is on its way; that is, a main attraction of an hour or more in length, around which the rest of the programme has to fit.

There is no doubt that the three reel subject has come to stay and as a money earner, provided care be taken in its selection and it is properly handled, there is nothing to equal it …

… These three reel subjects are in great measure handled on the exclusive system by renting houses and are in many cases let out on the principle of one hall, one town …

Program Number Indicators. Nearly every kinematograph theatre that is worth speaking of now has programs printed describing the pictures, and it is therefore most desirable to install some form of number indicator so that each forthcoming item is made known to the audience.

Finally, it is worth remembering that the early cinema was full of song. There were films which were synchronised to gramophone disks (such as Hepworth’s Vivaphone) and live singing, often to lantern slides. Interestingly, this was more popular in the provinces than in London, and a necessity in Australia.

The Singing Picture and Singing to Pictures. In all up-to-date picture theatres it is now the custom to provide one or more singing pictures, or one or two vocalists to sing to the pictures, and this even where a fairly large orchestra is employed. This may not be so general in London, but in the provincial towns this variety in the program is much appreciated, whilst in Australia and the Colonies it is a necessity for success.

We will end our series with the eighth part, on obtaining a cinematograph licence.