We have previously reported enthusiastically and in detail on the digitisation of American film journals such as Photoplay and Film Daily undertaken by David Pierce for the Media History Digital Library, all of which can be located on the Internet Archive at www.archive.org/details/mediahistory.

And now there’s more, because Pierce is branching out into books. He has digitised a number of essential American and British studio directories and trade annuals from the 1920s to the 1950s. They are as follows (in chronological order):

I can’t begin to tell you what a fabulous collection these represent (you can find them all through the one link here). The film trade almanacs and annuals are among the best guides we have to the workings of the motion picture industry, because they were produced for the industry and with huge contributions from that industry, as performers, filmmakers, studios, technicians and services supplied vital information to these reference sources that everyone else in the industry would then consult. If you weren’t in Quigley’s Motion Picture Almanac, Wid’s Film Daily Yearbook or the Kine Year Book in Britain, then you were invisible. So everyone had to be listed (though competing yearbooks meant that some submitted details to one reference source and not another – so always double-check if you can). Such reference books have been the bread and butter of film history research for decades. They include lists of films produced over the previous year, studio details, biographies of actors, filmmakers and technicians, statistics, background information, gossip and anecdote, information on legal cases, and copious advertisements. Above all they are full of names, and in the word-searchable form in which they are given on the Internet Archive, they are even more useful to the researcher than arguably the printed volume would be (though it’s handiest to have both). 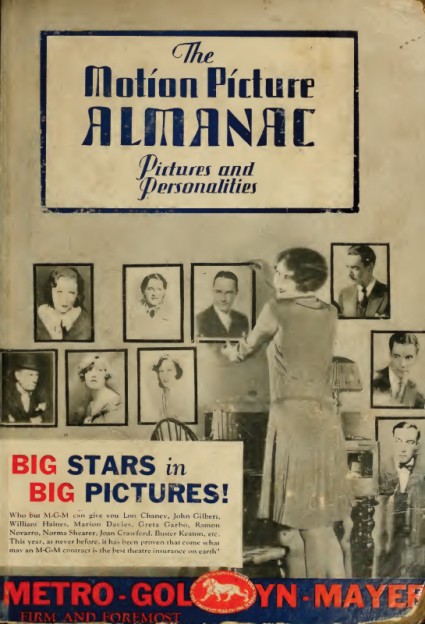 There isn’t space to go through each of the volumes, though I heartily recommend the immensely informative Motion Picture Almanac for 1929, the Kine Year Books for their invaluable primary information on British film, and the fascinating overview of the American film industry in 1926 that is The Annals of the American Academy of Political and Social Science: The Motion Picture in Its Economic and Social Aspects (not strictly speaking a film year book). I also have great fondness for Clarence Winchester’s The World Film Encyclopedia, not because it is especially useful as a reference source (“close to useless”, says Mr Pierce), but because it was one of the first film books I ever bought and I found it so full of apparent riches. It’s also of value for being the sort of reference guide that a fan would have bought rather than a film industry type.

I may write posts on individual volumes in due course, but what I have done is create yet another section of the Bioscope Library, this time devoted to directories, to go alongside those for books, journals, and catalogues and databases. All of the directories above are listed (including those for the post-silent era, because they generally have information going back to the silent period), plus those directories previously reported on by the Bioscope.

Thank you once again to David Pierce for his digitisation efforts. He continues to add film trade journals to the Internet Archive, and we will continue to try and keep up somehow by listing them all.