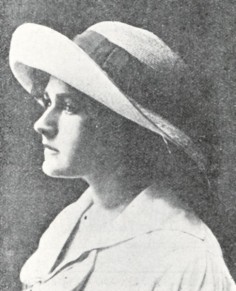 Jessica Borthwick, from The Bioscope

Having promised more on early war films, in recognition of Stephen Bottomore’s recent work, and the posts on British women filmmakers and the collection of women’s writings on cinema, Red Velvet Seat, I’m going to combine these interests by writing something on Jessica Borthwick, cinematographer of the Balkan War of 1913. Red Velvet Seat, in its otherwise excellent author biographies, says of Borthwick “no information found”. Well, I think we can do a little better than that.

Jessica Borthwick was twenty-two years old when she set out to film and photograph the second Balkan War (essentially the Bulgarians were fighting the Turks, Serbians and Greeks) in 1913. She filmed there for a year, not on behalf of any film company, but purely for her own interest, with the aim of exhibiting films and photographs on a lecture tour around Britain on her return.

Good connections enabled her to take this unusual step. She was the daughter of General George Colville Borthwick (1840-1896), who had been commander-in-chief of the army in Eastern Roumelia (part of Bulgaria after 1885). His brother was Sir Algernon Borthwick (1830-1908), 1st Baron Glenesk, a prominent figure in Victorian society as editor of The Morning Post, a position that by 1913 was occupied by his widow, Alice. The Hon. Miss Borthwick therefore found many doors open to her, particularly in Bulgaria, but that does not explain the remarkable determination and enterprise shown in an interview she gave for The Bioscope, published as ‘A Girl Cinematographer at the Balkan War,’ 7 May 1914. Here’s an extract:

… I took out with me to the Balkans one small plate camera and one cinematograph camera, which was made for me by Mr. Arthur Newman, who taught me in three days how to use it. This cinematograph camera of Mr. Newman’s lasted me the whole twelve months, in spite of the fact that it underwent terribly hard usage and received no repairs whatever except for my amateurish efort to mend it with bits of wire …

The difficulties of taking cinematograph pictures on the battlefield, especially when you are alone and unaided by any assistant, are, as you can imagine, tremendous. The use of a tripod is a particular embarrassment. Things happen so quickly in time of war that, unless one can be ready with one’s camera at a few seconds’ notice, the episode one wishes to record will probably be over. During the Servian war in Macedonia, my tripod was smashed by a shell, and although the camera was intact, the film which I was taking at the time got hopelessly jumbled up and had to be cut away from the mechanism with which it had become entwined.

Another great difficulty was the want of a dark room. One day, while taking films in the Rhodope Mountains, I came to a strange village of wooden huts inhabited by a nomadic race called Vlaques. Something went wrong with my camera, and I tried to make the people understand that I wanted some place which would serve as a dark room. It was impossible to get them to grasp what I meant, however, until eventually I found a man making rugs out of sheep’s wool. After much persuasion, I induced him to cover me up with his rugs, and in this unusual and very stuffy ‘dark room’ I managed to open my camera in safety. Having no film
box with me at the moment, I wrapped the negative up in pieces of paper and stowed it away in my pocket, carrying it thus for fifteen days until I returned to Sofia. Occupied with other matters, I forgot the film and handed my coat to a servant who, being of an inquisitive nature, unwrapped the negative, and finding it uninteresting, put it back in the pocket without the paper, afterwards hanging up the coat to air in the sun. Subsequently I developed the film – and found it one of the best I had.

The want of a technical dictionary, combined with the natives’ ignorance of photography, brought about several rather amusing situations. On one occasion, in Adrianople, I lost a screw from my tripod. There were shops of most other kinds, but no ironmongers, and at last, in despair, I tried to explain to an officer what I wanted in dumb show, not knowing the word for ‘screw.’ Having followed my actions for some moments with apparent intelligence, he suddenly hailed a cab and bundled me hastily in. We drove right across the city, until eventually we entered some massive gates and drew up – inside the prison! However, I turned the misconception to advantage by securing some excellent snapshots and having some very interesting talks with the prisoners. One convict – a German of considerable education – invited me to go and see him hanged the next morning. I saw two executions in that prison.

During the cholera rage in Adrianople, everything connected with that terrible disease was painted black. The carts in which the dead bodies were carried away were black, for example, as were the coffins in which cholera victims were buried. While the scourge was at its height, I went down into the gipsy quarter to take a film. The people in this part of the city had never seen a camera before, and when they saw me pointing my black box at various objects they thought I was operating some wonderful new instrument for combating the disease which was destroying them. Quickly surrounding me, they came and knelt upon the ground, kissing my feet and clothing, and begging with dreadful pathos that I should cure them. It was a task as sad as it was difficult to explain that their hopes were mistaken, and that I was impotent to help them …

What are my present and future plans? Well, in a few days time I hope to start a month’s engagement at the Polytechnic to lecture twice daily on the war … With regard to the future, I shall leave England in June next for the Arctic regions, where I want to start a colony for the cure of consumption and other diseases. This is the dream of my life. The great open spaces of the North are God’s sanatorium, and I believe that, when once their possibilities are known, their value will be recognised. I have been in the Arctic regions before. Yes, I shall take two or three cameras with me, induding Mr. Newman’s wonderful new hand cinematograph camera. When shall I return? That I cannot say. Perhaps at the end of a year – perhaps never.

Her lecture ambitions appear to have been thwarted. A court case followed in which she accused her projectionist of incompetence and having ruined her lecture engagements. Nor did she return to the Arctic. The First World War intervened, and she is next heard of as an ambulance worker on the Western Front, where she was wounded by shell and decorated by the Belgians.

Then what happened to her? She appears not to have married, but to have been a society figure, mentioned from time to time as having attended august gatherings of London society, into the 1940s. In 1946 she is recorded as having given a talk to the Sailors’ and Airmen’s Families Association, on the problems of life. She may be the same Jessica Borthwick who is occasionally referred to as a sculptress. We have no record of her death. Her films, alas, are not known to survive. Because they were never commercially released, there does not even seem to be a review of them, or any stills. Nor does it seem that her photographs exist. Perhaps this post will have brought together sufficient information for someone else to go in pursuit of her and discover more. It would be a worthwhile investigation.

By the way, the interview with her from The Bioscope is reproduced in full in Red Velvet Seat, while a lengthy abstract is given in Kevin Brownlow’s The War The West and the Wilderness.