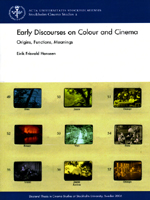 I have just stumbled across a really excellent thesis on the history, function and meaning of early motion picture colour processes, especially Kinemacolor. It’s written (in English) by Eirik Frisvold Hanssen, of Stockholm University, and is entitled Early Discourses on Colour and Cinema: Origins, Functions, Meanings. It is an historical and theoretical examination of motion picture colour processes 1909-1935, and in particular it focusses upon Kinemacolor, the colour system invented in 1906 by George Albert Smith and sold to the world by the ebullient Charles Urban. It was first exhibited in May 1908, given the name Kinemacolor in 1909, and for five or six years it was the sensation of film exhibitions worldwide, until it was brought down by a court case and then rival colour systems, such as Technicolor.

Hanssen’s thesis contextualises Kinemacolor within a broader history and analysis of colour, while remaining very sound on the purely technological side of things. Its centrepiece is a detailed study of the 1912 Kinemacolor catalogue and its representation of the idea of colour. The thesis can be downloaded as a PDF (1.47MB), or Hanssen’s book based on the thesis is available from Coronet Books, or it can be ordered via the US book site Barnes & Noble. It’s an exceptional piece of work – aimed at the specialist, but wise in the way it shows how important it is to view motion picture colour within a wider, historiographical undcerstanding of colour.

Kinemacolor has a perennial fascination, and there should be more activity coming up, given the centenary next year, and a recently-announced research project by the University of Bristol into Kinemacolor and Technicolor. As always, The Bioscope will keep you informed.