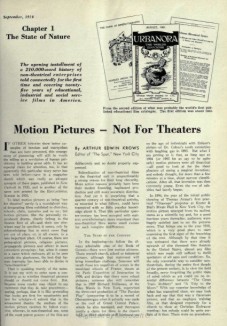 Now this is important. The Prelinger Archives are digitising the whole of the American journal The Educational Screen, and putting it up on the Internet Archive, volume by volume, 1922 to 1962. The journal reported on the educational film in America, and is an important source for learning about the non-theatrical film business and the rise of 16mm.

But its particular importance comes because between 1938 and 1944 The Educational Screen published Arthur Edwin Krows’ vast history of the non-theatrical film, Motion Pictures – Not for Theaters. It was published one chapter at a time, issue by issue, though it was never completed. It would probably never have found a publisher as a book, being of such length, rambling in style, and specialised in theme, but it is a fabulous store of information on filmmakers, films and film businesses working to make films that instructed, advertised, propagandised or educated, which simply cannot be found anywhere else. Sometimes the history is dubious, or too bound up with anecdote, and relevant information on people is often scattered across the chapters (the word-searchable text files supplied on the Internet Archive will be a huge help).

Caveats aside, it has a huge amount of information on the silent era, from the 1890s onwards, including such key figures as Charles Urban, Lyman Howes, Burton Holmes, Percy Smith, George Kleine, Jean Comandon, Max Fleischer, Joseph De Frene, James A. Fitzpatrick and Alexander Victor. Once again Rick Prelinger has done scholarship a marvellous service.

June 5, 2007 By urbanora in DVD and Blu-Ray, Non-fiction, Science and medicine

The new BFI DVD of the surreally beautiful films of scientific filmmaker Jean Painlevé, Science is Fiction, looks marvellous just by itself, but for lovers of early scientific films (there are a handful of us) the DVD also includes Percy Smith‘s The Birth of a Flower (1910) and The Strength and Agility of Insects (1911, though this is actually the retitled The Balancing Bluebottle from 1908), with its cork-juggling flies.

What is going on with the British Pathe website? Having written one post on the early fiction films to be found there and another on the newsreels, I had to write a third pointing out that the free low resolution downloads were no longer available (but could be found on the ITN site), and that high resolution copies for which you had to pay were all that were available. But now the free download films – all 3,500 hours of them – are back on the British Pathe site. I think the only advice must be to download while you can.