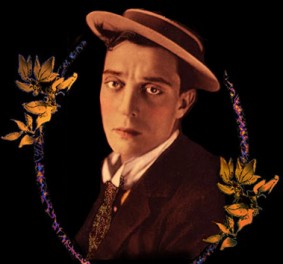 There are numerous websites out there dedicated to the leading stars of the silent era, but probably none is better than www.busterkeaton.com, the site of the Damfinos, the International Buster Keaton Society (The ‘Damfino’ is the name of Buster’s vessel in his 1921 short The Boat).

It is a beautifully-designed site, which is not only richly informative but filled with the look and spirit of Keaton’s work. There is news, a detailed biography, a filmography with thorough credits and synopses, a guide to books on Keaton, memorabilia for sale, and a discussion forum. There are also articles, both commissioned and reprints, again gorgeously designed (by Victoria Saint-Claire), which show the richness of Keaton studies. There is much to discover, not only about his films, but about his background in vaudeville, his family life, and in the lives of those who worked with him. And there’s a ‘step back in time’ feature which tells you what Keaton and his family were doing 100 years ago.

Of all the great comedians of the silent era, it is Keaton’s reputation that is currently at the highest. He is sometimes unfairly compared to Chaplin, to the latter’s detriment, when each worked to significantly different ends. Chaplin was the great symbol of his times, the downtrodden everyman who spoke (silently) to anyone in the cinema audience, done down by the system but aware of his individuality and the power that that represented. Keaton was the supreme ironist, in gesture, action and theme. We see our modern selves in him, battling against the indignities of an absurd world. In Chaplin we see what is past; in Keaton what endures.