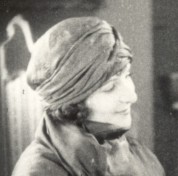 Browsing through Project Gutenberg, I have found a great many short or incidental references to silent movies which might never otherwise be found by researchers.

An example is Roving East and Roving West, a 1921 collection of essays by E.V. Lucas. Edward Verrall Lucas (1868-1938) was an over-prolific essayist, with an easy style and a view on practically everything. He was an interested observer of the rise of motion pictures in the early years of the twentieth century, but by 1921, he had grown cynical at the numbing qualities of popular cinema and the medium’s failure (in his eyes) to live up to the promise of the documentary account of Cherry Kearton’s African films or Herbert Ponting’s Antarctic films. The simple response to Lucas would be that a cinema that only showed us visits to the jungle or the South Pole would soon lose its appeal, and he lapses too easily into criticising a mass audience for its simple pleasures. Nevertheless, the whole Norma Talmadge sequence can still make us squirm. The essay is called ‘The Movies’:

We have our cinema theatres in England in some abundance, but the cinema is not yet in the blood here as in America. In America picture-palaces are palaces indeed – with gold and marble, and mural decorations, built to seat thousands – and every newspaper has its cinema page, where the activities of the movie stars in their courses are chronicled every morning. Moreover, America is the home of the industry; and rightly so, for it has, I should say, been abundantly proved that Americans are the only people who really understand both cinema acting and cinema
production. Italy, France and England make a few pictures, but their efforts are half-hearted: not only because acting for the film is a new and separate art, but because atmospheric conditions are better in America than in Europe.

It was in Chicago that I had my only opportunity of seeing cinema stars in the flesh. The rain falling, as it seems to do there with no more effort or fatigue to itself than in Manchester, I had, one afternoon, to change my outdoor plans and take refuge at the matinee of a musical comedy called “Sometime,” with Frank Tinney in the leading part. Tinney, I may say, during his engagement in London some years ago, became so great a favourite that one performer has been flourishing on an imitation of him ever since. The play had been in progress only for few minutes when Frank, in his capacity as a theatre doorkeeper, presented by his manager with a tip. A dialogue, which to the trained ear was obviously more or less an improvisation, then followed:

Manager: “What will you do with that dollar, Frank?”

Manager: “Why do you always go to the movies when there’s a Norma Talmadge picture, Frank?”

Manager: “Why is Norma Talmadge your favourite actress, Frank?”

Frank: “Norma Talmadge is my favourite actress because she is always saving her honour. I’ve seen her saving it seventeen times. (To the audience) You like Norma Talmadge, don’t you?” (Applause from the audience.)

Frank: “Then wouldn’t you like to see her as she really is? (To a lady sitting with friends in a box.) Stand up, Norma, and let the audience see you.”

Here a slim lady with a tense, eager, pale face and a mass of hair stood up and bowed. Immense enthusiasm.

Frank: “That’s Norma Talmadge. You do like saving your honour, don’t you, Norma? And now (to the audience) wouldn’t you like to see Norma’s little sister, Constance? (More applause.) Stand up, Constance, and let the audience see you.”

Here another slim lady bowed her acknowledgments and the play was permitted to proceed.

What America is going to do with the cinema remains to be seen, but I, for one, deplore the modern tendency of novelists to be lured by American money to write for it. If the cinema wants stories from novelists let it take them from the printed books. One has but to reflect upon what might have happened had the cinema been invented a hundred years ago, to realise my disturbance of mind. With Mr. Lasky’s millions to tempt them Dickens would have written “David Copperfield” and Thackeray “Vanity Fair,” not for their publishers and as an endowment to millions of grateful readers in perpetuity, but as plots for the immediate necessity of the film, with a transitory life of a few months in dark rooms. Of what new “David Copperfields” and “Vanity Fairs” the cinema is to rob us we shall not know; but I hold that the novelist who can write a living book is a traitor to his art and conscience if he prefers the easy money of the film. Readers are to be considered before the frequenters of Picture Palaces. His privilege is to beguile and amuse and refresh through the ages: not to snatch momentary triumphs and disappear.

The evidence of the moment is more on the side of the pessimist than the optimist. I found in America no trace of interest in such valuable records as the Kearton pictures of African jungle life or the Ponting records of the Arctic [sic] Zone. For the moment the whole energy of the
gigantic cinema industry seemed to be directed towards the filming human stories and the completest beguilement, without the faintest infusion of instruction or idealism, of the many-headed mob. In short, to provide “dope.” Whether so much “dope” is desirable, is the question to be answered. That poor human nature needs a certain amount, is beyond doubt. But so much? And do we all need it, or at any rate deserve it? is another question. Sometimes indeed I wonder whether those of us who have our full share of senses ought to go to the cinema at all. It may be that its true purpose is to be the dramatist of the deaf.

What great novels were lost because writers were lured by the easy money of Hollywood? What a ridiculous accusation. Why not ask what great films were made because bright minds were put to working on the medium made for the times, sparing readers from sub-Dickensian epic novels. The movies have given us much to be thankful for.