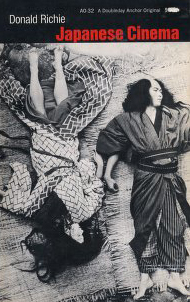 Back we go to the Bioscope Library, and fresh on its shelves is Donald Richie’s Japanese Cinema: Film Style and National Character (1971). Richie’s classic study of Japanese cinema history (itself a revision of his original 1961 book Japanese Movies) has been reprinted online as is by the University of Michigan’s Center for Japanese Studies. Richie has this to say about the exercise:

For this online edition of my 1971 Japanese Cinema: Film Style and National Character, I have decided to leave the book as it is. It contains no major errors that I know of and its methodology represents its time – thirty-three years ago. I would write it differently now – in fact, I have, in A Hundred Years of Japanese Films (2001). Now, my ideas of film style have broadened and I am no longer so confident that such a thing as national character can be said to exist. Nonetheless, this book still has its uses.

Indeed it does. For our purposes, it provides a clear, cogent and thorough account of Japanese cinema in its silent era, which of course extended for longer than silents in the West, as Japanese films continued to be silent well into the 1930s. The book covers the arrival of the film in Japan in 1896; the first native entrepreneur showmen and producers; the rise of distinctive national cinema traits, notably the benshi narrators who elevated the presentation of film to a high art; and emerging artistry of filmmakers orking in genres such as the samurai historical dramas.

There have been fuller accounts since of the earliest years of Japanese film, and Richie cuts quite quickly to the 1920s/early 30s and the early masterpieces of Mizoguchi, Gosho and Ozu. But while one will want to look elsewhere for historical detail, Richie excels at binding together the medium with the nation that produced it and in delineating trends in the art of the film. The parallels drawn between Japanese cinema and contemporary achievements in Western art cinema perhaps show their age, but overall the opening section of this book is a fine way for anyone to begin their discovery of silent Japanese film.

Japanese Cinema is available as downloadable PDF or as individual page images. Do note that all illustrations have been removed from this online edition.