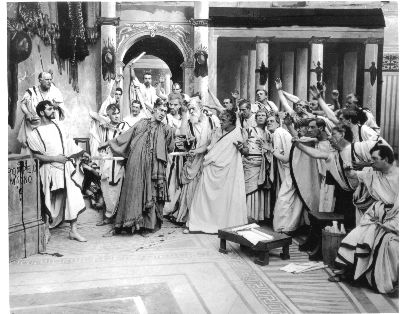 The classical world has always provided rich material for the cinema (until recent times, where togas are reserved for television and people shudder at the thought of Troy and Alexander), and this was especially true for early cinema. Classical subjects allowed the infant cinema to show how elevated it could be (and hence not deserving of some of the social criticism it was receiving), how it could handle famous texts (usefully out of copyright), and how it could dress up itself and indulge in special effects.

Above all, it could thrill audiences with true-to-life sights of Julius Caesar and Cleopatra, and allow them witness the siege of Troy and the last days of Pompeii. In Italy in particular, a thirst for the classical led to epics on a vast scale, such as Quo Vadis? (1913) and Cabiria (1914), which extended what the cinema could portray – visions of limitless space, populated by thousands, spectacularly arrayed, a vast panorama unfolding a highly romantic conception of history. (For more on such films, see The Bioscope Guide to Italy).

And so to what sounds like a lot of fun. The University College London (UCL) Department of Greek and Latin is presenting The Ancient World in Silent Cinema, an afternoon and evening of silent film screenings with piano accompaniment and related talks on Wednesday 28 January 2009, at UCL Bloomsbury Theatre, 15 Gordon Street, London, WC1H 0AH. The event is open to all and admission is free.

The screenings focus on Ancient Greece and Ancient Rome, with an emphasis on one-reelers rather than the later epics (no doubt because that enables you to squeeze in more titles). There is more information on the UCL site, including detailed, redolent synopses taken from the database of the BFI (which is supplying all the films), but here’s a summary listing:

(Patrizia e Schiava, by the way, is the first film ever acquired by the National Film Archive, as it then was. It was acquired in 1935, under its English title Afra, and was give the vault location number 1A.)

And there will be more. A second afternoon and evening of Ancient World silent film screenings will be held on Monday 22 June 2009, from 2-6 and 7-10 pm at the Bloomsbury Theatre, with the theme this time being films with settings in Biblical or Near Eastern Antiquity.