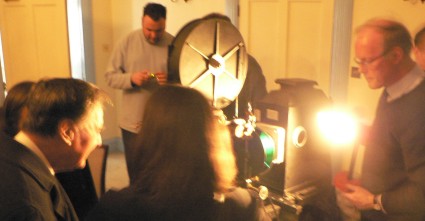 Kinemacolor, as you will probably have deduced by now, is of great interest to the Bioscope, and it was sad that so few could get to the invite-only ‘centenary’ screening of some Kinemacolor films which took place at the BFI National Archive in Berkhamsted in February of this year.

All of which leads us to this cenentary event at the National Media Museum, Bradford, which is offering the chance to see Kinemacolor screening alongside other treasures. Here’s the blurb:

Here is news of a special presentation taking place on Sunday 15 February 2009 at the National Media Museum, Bradford to mark the centenary of Kinemacolor, the world’s first successful cinema colour process. Entitled Bringing Colour to the Movies – re-creating what it was like to go to the Picture Palace a century ago, it is presented by David Cleveland, Brian Pritchard and Nigel Lister, who provides piano accompaniment.

The show includes short films from the 1890s, comedies and trick films from between 1900 and 1908, the first successful British animated film Dream of Toyland and film of the Titanic in 1912. These are shown on a hand-turned Gaumont Chrono 35mm projector of about 1912, restored by Nigel Lister. This machine worked in the Picture Palace at Southwold, Suffolk and survived until 1958 under the raked seating of the cinema, from where it was rescued by David Cleveland.

Kinemacolor’s first public showing was on 26 February 1909 at the Palace Theatre, London. It was very successful for about six years, then, after losing a lawsuit claiming its patent invalid, Kinemacolor went into a rapid decline. At the height of Kinemacolor’s success there was a large library of films but these were later destroyed and very little survives. The Filmmuseum in Amsterdam have a few films and they have very kindly provided a print of one for this show.

The Kinemacolor projector used, No 19, is from the first batch delivered in 1910 and was used in the Argyll Theatre in Birkenhead. It somehow survived, and has been stored in the Wirral Museum. With the help of Colin Simpson, the Principal Museums Officer, the projector has been on loan to Brian Pritchard who has restored it to working order without altering the machine. With a motor to drive the mechanism at 32 frames per second and a new print of Italian Lakes (1910), Kinemacolor is on the screen once again.

The programme concludes with the science fiction drama of 1909 produced by Charles Urban called The Aerial Torpedo. This film demonstrates the one colour system in regular use throughout the silent period – tinting.

This special presentation will include an introduction and commentary between films by David Cleveland, with Brian Pritchard on the technicalities of Kinemacolor and Nigel Lister on the restoration of the Gaumont Chrono projector.

An accompanying display of original objects and artefacts from the Museum’s Charles Urban archive and Cinematography collection, tells the story of Kinemacolor’s spectacular success. This will be on show from 10 February 2009 at Insight: the Collections and Research Centre on Level One of the Museum. Free entry Tuesdays–Sundays 10.00am–6.00pm.

As someone who spent years (literally) delving into the manifold riches of the Charles Urban archive (formerly of the Science Museum library in London but now held in Bradford), I can recommend going just to see a display of those alone. As for that lost Kinemacolor library,it is a tragedy that the great majority is lost. But we must never lose hope, and the Bioscope is keeping its eyes and ears open, and will let you know should it find anything, one day.