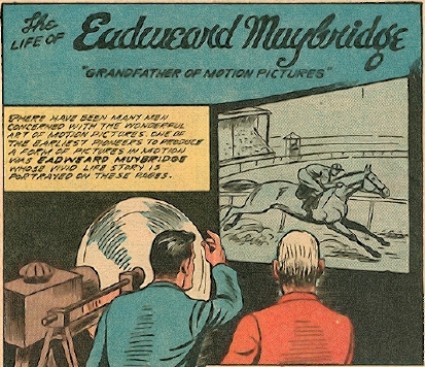 Some artistic licence employed for ‘The Life of Eadweard Muybridge “Grandfather of Motion Pictures”‘, Camera Comics No. 4, Spring 1945, from The Compleat Muybridge

The Bioscope has complained before now that the Web lacks a definitive resource for the ‘Father of the Movies’ Eadweard Muybridge. At last it looks like we have one. Over the past couple of years Stephen Herbert has been building up two essential Muybridge research tools – a blog (Muy Blog) and a detailed chronology. Gradually extra bits of essential information have been tacked on to these, and now he has brought the two resources together with a whole range of new information, and created – The Compleat Muybridge.

It’s a great title, and ideal for one such as Muybridge who appreciated the effect of a grand word. And though the author pleads that the title is ironic, since there never will be a complete life of the protean and often mysterious Mr Muybridge, there is more than enough here to satisfy the most demanding expert in the field of nineteenth century proto-motion photography.

There is, to begin with, a short biography with all the salient details. There is the chronology 1830-1904, available in both detailed (and annotated) and ‘lite’ versions. There is the blog (more a set of news alerts), with much valuable information on new discoveries, publications and events (note that the blog is in three parts: 2007, 2008 and 2009 now underway).

And then comes the new material. The Compleat Muybridge offers a comparative timeline of events in the life and work of Eadweard Muybridge, and his world, in photography, chronophotography and motion pictures, science and technology, and world events. The texts section provides transcriptions or scans of various original texts and articles from the author’s own or private collections, plus links to downloadable documents from the Internet Archive and the University of Pennsylvania Archives.

Kingston in a New Light, a projection project held over two nights in September 2008 using new film and Muybridge images shown on buildings in the centre of Muybridge’s home town of Kingston

The references section complements the chronology, but the citations come with illuminating personal comments on the key texts. And then there are animations of Muybridge photographic sequences (i.e. links to these on other resources) with links to YouTube videos which either animate Muybridge or which are inspired by him in one form or another, as in the Kingston video above.

Added to all that there is a bibliography (a work in progress), a colourful section on modern exhibitions of Muybridge’s work, links, and finally a section on the Zoopraxiscope, the machine by which Muybridge was able to project animated versions of his sequences in silhouette form, on glass discs. Happily there’s a search option to bind it all together.

It’s a fabulous resource already, but the author warns us to revisit regularly as new material is certain to be added (weekly, we’re promised). Muybridge scholarship is evolving all the time, and Herbert would argue that we still haven’t really understood Eadweard Muybridge as yet. His achievement has been so often obscured by an insistence that he should be seen as inventor of motion pictures(when he was working to other ends), and latterly that he was a pure artist, with none of the scientific rigour that he claimed for himself (which is to misunderstand what ‘science’ means). He has time and time again served as a reflection of the concerns of others, rather than being understood for what he achieved, or dreamed of achieving.

It is a complex story, but as Herbert points out, with Muybridge nothing is easy. Go explore.