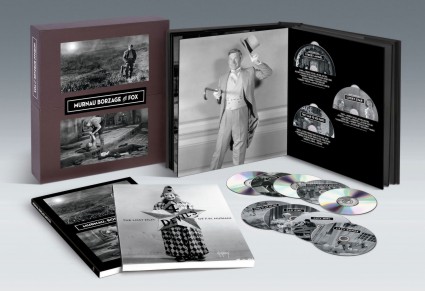 Published on 9 December is the latest in the lavish boxed sets of silents which are raising the bar for DVD releases in our field. 20th Century Fox Home Video is releasing (in the USA) a 12-disc set of films directed by F.W. Murnau and Frank Borzage for the Fox Film Corporation in the 1920s and 1930s, Murnau, Borzage and Fox (1925-1932). The collection comprises:

You also get a new documentary on Murnau and Borzage by John Cork, and two books of photographs on the films. What’s missing is Borrzage’s recently rediscovered (though incomplete) The River (1929), which is instead released on DVD by Edition Filmmuseum. There is, however a The River reconstruction featurette and stills gallery. For Murnau’s lost film, The 4 Devils, there is Janet Bergstrom’s film Murnau’s 4 Devils: Traces of a Lost Film, plus screenplay, treatment and stills gallery.