June 27, 2011 By urbanora in Archives and museums, Catalogues and databases Tags: Silent films

In 2007 the UK government’s Department of Culture Media and Sport (DCMS) announced a £25M investment in screen heritage. The Strategy for UK Screen Heritage (later Screen Heritage UK) was a vote of confidence in the UK’s public sector moving image archives, predicated on the belief that strategic investment in those archives would pay off in terms of public value, short term and long term. The money was administered by the now defunct UK Film Council, and the beneficiaries were the BFI National Archive (which received the lion’s share of the money) and a number of English regional film archives. There were four elements to the original programme:

In practive the ‘demonstrating educational value’ element got absorbed by the others, but the remaining programmes strands have been pursued with vigour over the past four years, despite a reduction in the original award thanks to government spending cuts, and we are close to seeing the public results.

One of outcomes has gone live, though it hasn’t been announced as yet, and it remains in a test of beta phase. But it is out there, and it is of particular interest to us. It’s another example of the federated databases that we have been highlighting of late, and it is the Union Search. 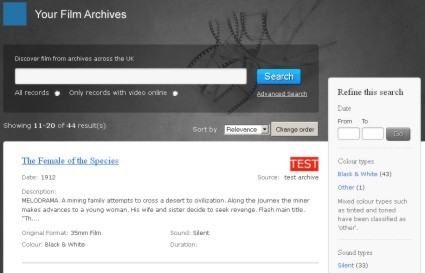 Union Search brings together the catalogues of seven film archives, with more partner archives promised: the BFI National Archive, Yorkshire Film Archive, Northern Region Film and Television Archive, Screen Archive South East, the North West Film Archive, the Wessex Film and Sound Archive, and Amber Films. It is a concatenation of catalogue records, not the films themselves, though it is possible to restrict searches to content that is viewable online, for which you are taken to the relevant film on the relevant film archive’s own website or other video platform. But for the most part this is about finding out who holds what.

This is a major step forward. The BFI’s own database is a tremendous resource, probably richer in information on film and television (especially for the silent era) than any other database out there, with the possible exception of the IMDb. We have been holding off from writing a review of it because there are some significant changes to be made to its structure, which we await. But what has been frustrating is that it is a database of film and television programmes that the BFI knows about, not just those that it holds, but it doesn’t tell you which those films are. The version at the BFI physical Library does; the online version doesn’t. If you know a thing or two about how the BFI organises its information, you can sometimes work out from the database whether it holds a film or not, but most people are reduced to guesswork.

Union Search is an online database of the BFI’s holdings alone. It’s not every film yet – there are 62,000 films listed under BFI (of which 4,500 are silent) but the BFI has over 800,000 titles all told, including many more silents than those 4,500, so we’re still dealing with a sample (there 260,000 titles under something ‘Test’ archive option which represents a greater amount BFI content, but none of these links now lead you to an actual catalogue entry). But it is an easy guide to what exists, including an outline indication of what formats are held, searchable by keyword, name, title, date, colour or b/w, sound or silent.

And then we get all the other archive catalogues as well. Archives such as the Yorkshire Film Archive or the North West Archive hold largely amateur and non-fiction films of relevance to the regions they represent. For silent films, that means another 7,000 titles on top of the 4,500 held by the BFI, from newsreels to home movies. 193 silent films all told are available to view online (go to advanced search, click on “only records with video online” and check the “silent” tick box beneath). Each catalogue entry gives you title, a short description (there are some shotlists available), format held, date, basic credits, keywords (a very haphazard selection – there don’t seem to be many trained cataloguers producing film catalogues nowadays), genre, sound or silent (or mute), colour or b/w, length and ID number. There is useful faceted searching, so type in any term and down the right-hand column it will tell you how many of your results come from which archive, which are silent or sound, and so on. And you can narrow your search down to a single archive, or combination of archives.

It must be stressed that Union Search, or Your Film Archives, is still in test mode. There are plenty of rough edges, from the lack of anywhere to click back to the home page after conducting a search, to the large number of false ‘test’ records. It presents very much simplified content, because when matching up disparate databases you are necessarily constrained by common denominators. It may also be storing up huge problems for the archives as researchers learn of titles that archives hold and demand immediate access – but to make all of the one-and-half million or so films and programmes held in the UK’s public sector archives available to all would cost a whole lot more than £25M. We must take these things one step at a time.

So, treat Union Search as a test site, with the expectation of not everything being there, or necessarily exactly as you might want it to be described. But to have the archives working together like this, creating a networked catalogue greater than the sum of their individual parts – that is quite something. And what can be built on this platform in time will be something more.

We’ll review it again when it goes public properly. Go explore (with all the caveats as noted above).