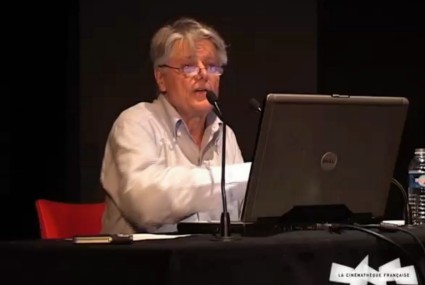 Maurice Gianati speaking on Alice Guy at the Cinémathèque Française

How’s your French? Regular Bioscopist Frank Kessler has kind sent me a listing of video on silent cinema and pre-cinema subjects which are available on the Cinémathèque Française website as part of its ‘Parlons cinéma‘ series. This is a series of videos (all in French) recording talks, conferences, debates, interviews and such like held at the Cinémathèque. They are knowledgeable and well-presented, with clips and PowerPoint slides interspersed among the talking heads.

This is list of some of the talks that fall within our area, covering such subjects as the Phantasmagoria, Alice Guy, Emile Reynaud, the phonograph in France, and introductions to Sergei Eisenstein and Laurel and Hardy:

From the little I’ve sampled, these are people who take their cinema seriously, and who can say that they’ve really tried cinema until they’ve tried it in French?