The Gaumont studios in Lime Grove in 1915, with the former Urania Cottage to the left

OK, it’s a bit of a catchpenny title for a post, but here’s an intriguing bit of history. I’ve been reading Jenny Hartley’s Charles Dickens and the House of Fallen Women. It tells the story of Urania Cottage, which was established in 1847 by the novelist Charles Dickens and the banking heiress Angela Burdett-Coutts. It was designed as an alternative refuge to the workshouse and usual reformatories for homeless young women whose lives were being ruined through poverty, imprisonment and prostitution. The intention was to show kindness where most regimes stressed guilt and punishment, inculcating its inhabitants with domestic virtues before shipping them off to the colonies in the hope that they would settle down happily in new lands.

Urania Cottage was located in the Shepherd’s Bush area, then farmland to the north-west of London. It operated as a women’s home for around fifteen years before changing hands, and Hartley tells us that just a single photograph exists of the building, taken in 1915. And there next door to the house is a huge building with glass walls and roof, which is instantly recognisable as the Gaumont film studios at Lime Grove, founded in 1915.

One is thrilled at the discovery and eager to demonstrate connections between the two. Did Gaumont produce any Dickens-based films at this time? Sadly no. The studio (which stayed glass-roofed only until 1917) went on to play a notable part in British cinema and television history. It was home to Gaumont and some Gainsborough productions (when Gainsborough wasn’t using its Islington studio), where Hitchcock filmed The 39 Steps and The Lady Vanishes, and where Gainsborough ladies like Patricia Roc, Margaret Lockwood and Phyllis Calvert formed a curious echo (“a new set of inmates” as Hartley puts it) of Urania’s inhabitants. There don’t seem to have been any Dickens-related films ever made at Lime Grove, though David Lean, future director of Great Expectations and Oliver Twist, did start out at Lime Grove as a tea boy and then cutter. Then the BBC took over the studios and made programmes there from 1950 to 1991, including Nineteen Eighty-Four, Steptoe and Son, Dr Who, Tonight, Top of the Pops and The Late Show.

Producer George Pearson in his office at Gaumont’s Lime Grove studios around 1915, very probably in one of the bedrooms used by the inhabitants of Urania Cottage, from his autobiography Flashback

Urania Cottage wasn’t just next door to the studios: it was a part of them. George Pearson, the first director to work at the studios in 1915, writes in his autobiography:

Offices and dressing-rooms were available in an adjacent house attached to the main building. 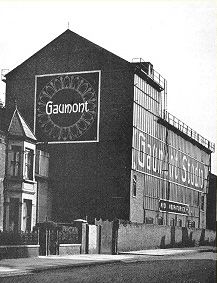 This was Urania Cottage. It was used as studio offices, dressing-rooms and apparently even bedrooms for performers staying over at the studio during the Blitz, though the original cottage was soon converted (it is unclear when) and replaced by a new house on the same site. Despite what Hartley says, there is at least one other photograph of the studios in 1915 (reproduced at www.gaumontbritish.com) which shows Urania Cottage, though at such a sharp angle and so obscured you would have to know it was there to recognise it tucked behind the building in front of it. Judging from the large Gaumont logo, this probably dates from a few months later, with the photograph at the top of this post depicting the studios still under construction.

The building that now fills the space where Urania once stood can be seen in photographs of the studio in its BBC days, as in this one from www.bbctv-ap.co.uk. The studio was demolished in 1993, and the space is now filled by housing. Urania Cottage was a well-intentioned initiative albeit with rather fixed ideas about what was good for its inmates (those who signed up had to agree to the emigration plans, which put off many would-be applicants who found it hard to see the difference between emigration and transportation). Those who lasted what was usually a year at Urania were then shipped out to Australia, South Africa and Canada, with mixed results it would appear from the available evidence.

Rather appropriately, on the site where Urania Cottage once stood there is now a hostel for the homeless, run by the St Christopher’s Fellowship. Thus film production comes and goes, but charity lives on.