May 7, 2011 By urbanora in Catalogues and databases, Cities, Criticism and theory, Resources, Travel and exploration Tags: Silent films

Google Map showing locations of films made in the early 1900s by R.W. Paul in the Muswell Hill and New Southgate area, produced by the Cine-Tourist

My favourite website of the moment is the Cine-Tourist. The site has been created by Roland-François Lack of University College London as a home for his studies into cinema and place. It’s a model example of how to use the Web as a home for research in forms to which the Web is best suited.

The Cine-Tourist, as Lack bills himself, is interested how films record and depend upon place, both literally and metaphorically. He demonstrates the interrelationships in a number of engrossing ways. For example, his site has sections on cities: that on Paris has 63 frame grabs from Jacques Rivette’s Paris s’en va (1981), identifying the specific locations; that on London has a series of frame grabs rather playfully showing maps that appear in films depicting police stations. That all sounds rather little bit trainspotter-ish, but in practice pinpointing the specifics of place somehow deepens the sense of depth in a film, in the way that it always leads our imagination away from the literal.

This is made clearer in the Cine-Tourist’s blog, The Daily Map, which posts daily frame grabs from a wide range of films, each showing a map significantly positioned in the background, often with an engrossing quotation underneath, from studies of image, place and cultural history. Several of the examples so far are from silent films, as in this frame still from Jean Epstein’s La chute de la Maison Usher (1928): 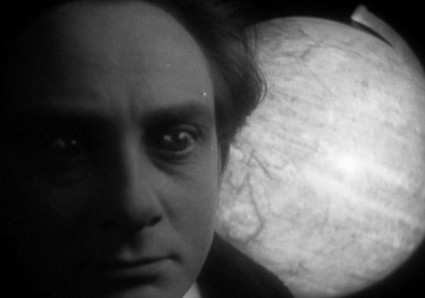 There are other elements to the site, including thoughts on methodologies, a biographical account of his local cinemas, links and a helpful bibliography of “books and essays that read maps in films or films through maps or films as maps …” But I want to draw particular attention to the section Local filmmaker: local film subjects. The Cine-Tourist lives in the Muswell Hill area of London, and one hundred years ago the area was home and workspace for British pioneer filmmaker Robert W. Paul.

Paul lived and maintained a studio and film laboratories in the Muwsell Hill and New Southgate areas. The Cine-Tourist has photographed the intriguingly mundane buildings that were Paul’s homes in the area, but then has studied Paul’s films closely (both those extant and lost films nevertheless indentifiable to a degree through catalogues) and matched locations to film scenes. So far, this is much like the work done by John Bengtson at his Silent Locations blog (recently reported on by the Bioscope). The Cine-Tourist however goes further by subjecting the images to greater topographical and filmographical analysis, and by mapping the locations of some of Paul’s films of the 1900s onto Google Maps, as demonstrated at the top of this post. From this map you can go to the locations specific films, which you can additionally view on Street View or as a satellite view. Additional links take you to detailed information on Paul’s domestic and professional addresses, with further links to the London Project database on pre-First World War film businesses in London. 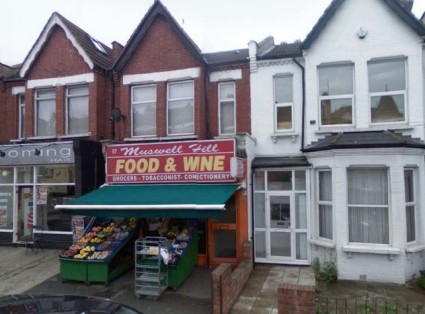 Robert Paul’s 1903 home ‘Malvern’, now the ‘Muswell Hill Food & Wine’,”the shop to which I go for last-minute, late-night supplies of wine and sundries” (the Cine-Tourist)

This isn’t just a piece of diverting local history. It links up the personal to the professional to the geographical to the Web. Lack begins with himself as London resident, or London traveller; traces his personal history of filmgoing and filmwatching in London (and other cities); documents this through the films in which people are themselves mapped in various ways; then brings all this together into a website which links out again to the greater world of film studies, area studies, and the co-ordinates of place in general. What it may all signify in the end, I couldn’t tell you exactly – but the journey is engrossing.

The Cine-Tourist is an example of an increasing trend in the scholarly study of the mysteries of place. Its inspiration goes back to the flâneur of 19th century Paris, the man in the crowd who was a part of the city yet by perambulating through it was somehow distanced from it, as Baudelaire described:

To be away from home and yet to find oneself everywhere at home, to be at the centre of the world, and yet remain hidden from the world.

The flâneur is a reader of the city through which he passes. Other inspirations for what has become a modern movement are Walter Benjamin’s Arcades project and the ‘situationist’ Guy Debord, who came up with the somewhat loose term ‘psychogeography’ often used to describe such preoccupations. Most recently there is the London writer Iain Sinclair, author of such richly allusive works as London Orbital (a tour of the M25 which circumnavigates London) and Lights out for the Territory, works to be found placed prominently in the London section of many a bookshop, doubtless bewildering the unsuspecting tourists who purchase them. Sinclair, like Debord, is also a filmmaker, and another member of the same ‘school’ is documentary filmmaker Patrick Keiller, whose 2007 exhibition placing images from early films onto the same locations today was covered by the Bioscope.

What is interesting is how such ramblings (literally so) have found their natural home on the Web; indeed are being encouraged by the Web, which by its very nature brings together that association of ideas that psychogeography seeks to achieve. Google Maps, Google Earth, Street View, OpenStreetMap (a free, editable world map), HistoryPin (mapping of people’s historical photos) and Geograph (a project inviting anyone to help document every square kilometre of the UK and Ireland with photographs) each encourage us to explore and share what we have explored.

London Sound Survey‘s mapping of sounds (the orange squares) from the London of today to the Booth maps of 1898, colour-coded to show levels of welath and poverty

Interestingly, many psychogeographical or semi-pyschogeographical sites are rather bad at using the Web. Among some of the better examples, check out Classic Cafes (London and seaside cafes), Derelict London (the strange poetry of abandoned corners of London), Urban Squares (city squares around the world), Mythogeography (“for walkers, artists who use walking in their art, students who are discovering and studying a world of resistant and aesthetic walking, anyone who is troubled by official guides to anywhere …”) and the excellent London Sound Survey (systematically mapping the city though its sounds).

For silent films, we are fortunate in having two outstanding examples of the use of mapping tools, though neither is strictly psychogeographical in intent. Going to the Show documents the experience of movies and moviegoing in North Carolina to the end of the silent film era, bringing together Sanborn fire insurance maps of the period and Google Maps; while Cinema Context documents cinema-going and films seen in the Netherlands, linking its database records to Google Maps and the Internet Movie Database. Both have been highly praised on these pages before now (see here and here). I shall be writing about Cinema Context again soon. For other such empirical studies of cinemas and their place, see the HOMER project website (though some of the links no longer work).

Roland-François Lack has another blog, The BlowUp moment, dedicated to frame stills showing the use of cameras in films, with a new image daily.