May 11, 2011 By urbanora in Digitised journals Tags: Silent films 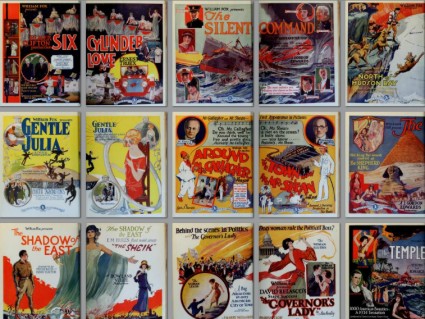 You will recall that about a year ago film archivist and historian David pierce announced the Media History Digital Library, a bold and imaginative project to digitise an extensive number of American film trade journals and make them freely available via the Internet Archive. The initial release compirsed four years of Photoplay (1925-1930) and one volume each of Motion Picture Classic (1920) and Moving Picture World (April-June 1913), as reported by the Bioscope at the time.

Now a second release has been announced, covering The Film Daily 1922-1929. The press release (which I’ve paraphrased slightly) says it all, including plenty of links encouraging you to sample the collection.

Yet more American film history for the 1920s is now available online with the publication of 2,400 issues of The Film Daily, a leading motion picture trade magazine from the classic era of Hollywood. Published in New York, these issues of The Film Daily from 1922 to 1929 document one of the most prosperous periods of the Hollywood star system, culminating in the rapid changes brought on by the change to sound film production.

The Film Daily joins other magazines scanned by the Media History Digital Library, including seventy-two issues of Photoplay from 1925 to 1930, Motion Picture Classic (1920), and numerous issues of Moving Picture World (1913), Exhibitors Daily Review (1926 and 1928), and also from 1928, a small number of issues of Daily Screen World, Sound Waves and The Distributor, the MGM house publication from 1928. The Film Daily volumes and other magazines digitised by the Media History Digital Library can be searched, read online and downloaded through the Internet Archive at www.archive.org/details/mediahistory.

The 22,000 pages of this release from The Film Daily include numerous reviews of features and shorts, news reports from throughout the industry, occasional feature items, and hundreds of full-page advertisements. There are full-page ads for feature films and short subjects, color ads for special releases (such as the films of Marion Davies and Harold Lloyd), and special color sections announcing studios’ upcoming releases for the next year (including many films that were never produced). Published six days a week, The Film Daily did not always cover topics in depth, but it is an invaluable resource for following the day-to-day progress of the industry or films in production. Among the treasures from this period are special issues devoted to the 20th anniversary of Carl Laemmle in the film business (28 February 1926), the opening of the Roxy Theater in New York (13 March 1927), Sound Pictures (22 July 1928) and Fox Film Corp. and the opening of Movietone City (18 June 1929).

A highlight of the magazine is its strong emphasis on short subjects. While most of the other trade magazines treated shorts as space allowed, shorts received regular reviews in The Film Daily, including for many years, a quarterly review of short subject production and releases.

Highlights from the collection include:

This is the second release of material by the Media History Digital Library, an initiative led by David Pierce to digitise collections of classic media periodicals in the US public domain for full public access. The project is supported by owners of materials who have loaned original materials for scanning, and donors who have contribute funds to cover the cost of scanning. A brochure describing the project can be found at the Media History website www.mediahistoryproject.org.

The Film Daily has been scanned from volumes in the collection of Karl Thiede, funded by an anonymous donation in memory of Carolyn Hauer. Scanning has been coordinated by Eric Hoyt, a Ph.D. candidate in the Critical Studies Division of the University of Southern California’s School of Cinematic Arts. The Media History Digital Library thanks Rick Prelinger and Casey Riffel for their assistance with this group of materials. The initial release of materials was scanned from the collections of the Pacific Film Archive Library and Film Study Center.

Part of an advertisement for Paramount News, from the 7 August 1927 issue of The Film Daily

If I can add to that – all of the journals are word-searchable, and can be browsed, searched and analysed through the Internet Archive’s excellent Read Online display tool which enables easy flicking from page to page, or the display of every page in thumbnail view, and to have every occurence of a search term listed as a link taking you to where it occurs on the page.

All of the journals digitised by the Media History Digital Library are listed in the Bioscope Library’s listing of silent era film journals available online. I try to keep this comprehensive and up-to-date, so please do let me know of any new resources or omissions. Meanwhile, warm thanks to David Pierce for his great initative in organising the funding and then the digitisation of such a fabulously rich collection. Now it behoves all of us to go and prove the value of this work by downloading and using all that we can. Go explore.