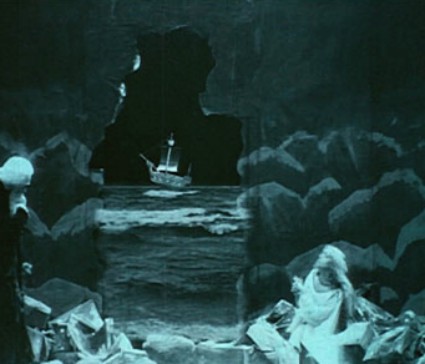 The Tempest (UK 1908), based on Shakespeare’s play, directed by Percy Stow

Apologies for the intermittent service, folks – it’s been a bit busy, and the Bioscope has been rather set to one side, gathering dust. But we return with news of a new online catalogue from the British Film Institute, which is some interest to us. The catalogue is The Performing Arts on Film & Television, which is available as part of the BFI website or can be downloaded as a single PDF (7MB). It’s a selective catalogue around 3,500 film and video materials, dating from 1895 to the present, held by the archives and collections of the BFI, Arts Council England, LUX, and the Central St Martins British Artists Film & Video Study Collection. It has been commissioned by MI:LL (Moving Image: Legacy and Learning), an Arts Council England initiative “to support projects and develop strategies that promote engagement with the arts through the moving image”.

So, what does this well-meaning venture give us? It is divided up into seven areas: British Music Hall and Variety on Film 1895-1930, Theatre, Dance, Music, Performance Art and Artists’ Film & Video, From Politics to Poetry, and Cinema Acting Styles. As said, it’s a selective catalogue, so it provides information titles that are likely to be of strong interest of researchers. Some areas are covered in more detail than others (it’s hard to see what value there is in the tokenstic choices given under Political Oratory or Propaganda, which is rather stretching the idea of ‘performing arts’ in any case). But one of the sections that aims for comprehensiveness is British Music Hall and Variety on Film 1895-1930, and that’s our territory, which is good.

The section has been researched by the BFI National Archive’s curator of silent films, Bryony Dixon. It aims to identify most relevant films for the 1895-1930 period held by the BFI that document music hall, which it divides into Records of performances and actualities, Original works made for cinema featuring music hall artistes, and Films based on music hall sketches and plays. So many of these films record the only performance by some of the legendary performers of the past, or document aspects of stage practice which can be read about in many places but never seen again – except through film.

So, for example we have E. Williams and his Merry Men (1899), a precious record of a seaside minstrel act; Lil Hawthorne singing Kitty Mahone in a 1900 synchronised sound film (1900); an extraordinary record of Hengler’s ‘plunging horses’ in a hippodrome act, c.1902, in a film known only as [Collapsing Bridge]; several Cinematophone, Chronophone and Vivaphone films of singers 1907-1909 which were originally synchronised with sound discs; music hall comedians such as Fred Evans (Pimple), Sam T. Poluski, George Robey and Lupino Lane in original comedies made for the cinema, rare film of the exterior of a music hall made in 1920, in the film Hoxton … Saturday July 3, Britannia Theatre; and numerous examples of DeForest Phonofilms – sound-on-film shorts made in the mid to late 1920s, chiefly of music hall and variety performers.

Other parts of the catalogue are more selective, and have relatively little on silent films. The Theatre section does point us to silent interpretations of classical theatre (an Italian Elektra by Euripedes from 1909, a 1911 Antigone by Sophocles), but the Shakespeare section is disappointingly selective and conventional. It mentions few silents, despite the BFI having the world’s largest collection of silent Shakespeare films. Look instead at the sub-section on 17th to 19th Century playwrights for such surprises as the Thanhouser company tackling Ibsen’s The Pillars of Society in 1911, or the 1915 American production of Ghosts with Henry B. Walthall. The Cinema Acting Styles section has a page on early and silent cinema, but it is peculiarly slender (just Orphans of the Storm, King of Kings, Piccadilly and a couple of documentaries – why bother?).

The catalogue is arranged thematically, so you will find silents dotted about all over the place, which is a good thing. It means researchers look for a theme, a performer or a writer might stumble across works which they could otherwise shun were they presented with a plain chronological listing. All of the archival films come from the BFI’s collections, and there is information on how to access the films from the multiplicity of options that BFI services provide.

I have meant for some while now to write a post on how to use the BFI’s main online database. I’ve refrained from doing so because of planned changes to that catalogue, which might render any advice too quickly out of date. But we’ll see. Meanwhile, targeted productions such as The Performing Arts on Film & Television are often a lot more useful for researchers for a useful selection rather than the bewildering vastness of a complete catalogue. Researchers seldom want everything; they want something that will be immediately useful to them. I hope this new catalogue – though it’s a bit of a curate’s egg, really – performs that function. It certainly makes for fascinating browsing.