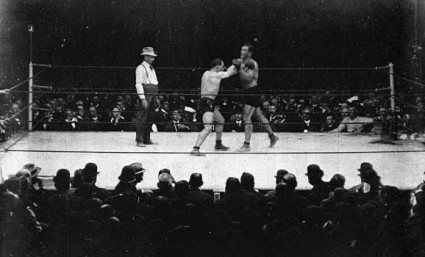 Welcome to Wonderland! The venue for our screening this evening is something special, and possibly the kind of place outside the experience of some of the gentler members of our festival attendees. We are in Whitechapel, in the heart of London’s East End, and Wonderland is where the working man goes to seek out entertainments after his own heart. Those with long memories may recall when this place was the East London Theatre and put on Yiddish plays for the Russians and Poles newly come to London. Rough were the entertainments and rough the audiences who enjoyed them. Then the place turned to boxing, and under the careful management of Mr Jonas Woolf it became Wonderland, home to boxing bouts, amusement shows, so-called freak shows, and cinematograph entertainments. Up to 2,000 people will squeeze themselves into Wonderland on a boxing night, and it is boxing that we have for you tonight, in this most appropriate of venues.

For tonight we bring you The Jeffries-Sharkey Fight. Yes, all twenty-five rounds of the world heavyweight championship bout held at Coney Island on 3 November 1899. But the fight lasted for some two hours you cry, it is not possible for a cinematograph to be so long in 1899. Ah, but it is, though the struggle to achieve so stupendous a record of pugilistic endeavour on the cinematograph was scarcely less tumultuous than the bloody struggle that was the fight itself.

The film is a production of the American Mutoscope and Biograph Company, whose products you may have seen a large-screen entertainments in variety theatres, or as Mutoscopes, those peepshows with cards rotated by a handle that are so popular in some amusement parlours. The company employs a unique 70mm film system, which can only be exhibited by its own projectors, a policy which has encouraged the pirates, as you will learn. However, the quality of the image achieved is extraordinary, and with none of the tiresome flicker that sadly drives some people away from the cinematograph shows. Following the great commercial success enjoyed by the Veriscope Company in filming the world heavyweight championship bout between James J. Corbett and Robert Fitzsimmons in 1897, Biograph secured the rights to film this match between Fitzsimmons’ conqueror, James J. Jeffries, and the challenger Tom Sharkey, a deal secured by Jeffries’ wily manager William Brady – a man acutely aware of the value of a motion picture deal to the boxer of today.

Yes, Boilermaker Jim versus Sailor Tom, 215lbs and 6′ 2″ against 183lbs and 5′ 8″, a contest that has gone down as one of the most grueling fistic encounters of modern times. Twenty-five rounds would be enough to test the stamina of anyone, but what made this encounter all the tougher was the presence of the motion picture cameras. The fight took place in the Coney Island pavilion, and once a decision was made not to remove the roof (to allow in daylight), it was necessary to film under artificial lights. Mr Dan Streible, the festival’s special consultant, informs us that the Biograph company boasts of employing eleven electricians to operate 400 specially built arc lights and associated feed wires, dynamos etc., while a it was boasted a dozen operators were required to man the four cameras. Over seven miles of cinematograph film were to be taken by the operators (we rather think that there were three of them) who worked in rotation, with the cameras in parallel so that one was operating at any one time while the others were loaded in readiness and a fourth stood by in case of breakdowns.

All those arc lights generated colossal heat. We are reliably informed that the scalps of the fighters were singed, and each suffered from great weight loss as the fight progressed. Add to this the brutality of the fight itself – Sailor Tom suffered two broken ribs – and one realises that one is to experience something extraordinary, a sporting endeavour which the cinematograph did not only record but in doing so affected its outcome. We fondly imagine that the cameras are passive witnesses of what parades before them, but maybe the camera being there necessarily changes what we see, so what kind of reality is it that the cinematograph is recording? 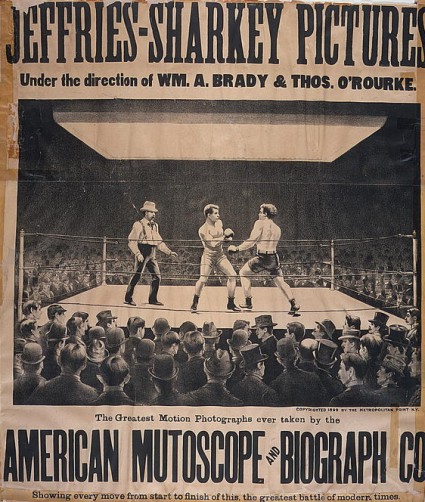 Poster advertising the fight film, from the Library of Congress collection

But enough of such philosophising, we must return to the fight. The result you will know. As tough and able as Sharkey undoubtedly was, able to withstand terrific punishment, Jeffries countered his every sally with fierce left hooks to the jaw and thunderous blows with the right over the heart. All was level, however, until the final five rounds, when the champion began to dominate and the strength had gone out of Sailor Tom’s punches. With an energising glass of champagne offered to him by his trainer before the final round, the Boilermaker entered the ring with renewed vigour comprehensively outbox his opponent and make the judges’ decision an easy one.

Thanks to the effort, expense and ingenuity of the Biograph company, you will be able to see all twenty-five rounds of this unsurpassed sporting encounter, with George Siler, referee for the contest, brought over at notable expense to serve as expert lecturer. He will guide you through the finer points of the scientific display that you will be witnessing. Now some may have heard rumours that the Biograph company were not able to film every second of the fight. Indeed, that is the case. Though the cameras themselves never failed, most unfortunately a fuse blew just as the twenty-fifth and final round was coming to a close. Exasperatingly for the filmmakers, they missed the crucial moment where Jeffries’ glove came off, Sharkey tried to take advantage, the bell rang, and Mr Siler held up Jeffries’ arm in victory. What exactly happened? How greatly we would value seeing the cinematographic record at this very point. It is unclear how the film company has got around this unfortunate lacuna. Some say that a judicious edit has smoothed over the gap; other claim that a re-enactment has been filmed. Mr Siler is saying nothing, and Mr Brady has been equally evasive. We will only be able to judge when we have seen the film ourselves. 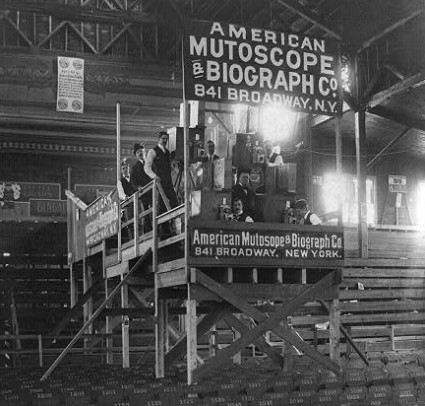 You may also have heard tales of other films made of this fight. Sadly, this is so. Despite the American Mutoscope and Biograph Company’s exclusive agreement with the promoters, other unscrupulous filmmakers who put not a penny towards the filming of the event yet are all to eager to benefit from the struggles of those who did are promoting films of the Jeffries-Sharkey fight. One company, Lubin, as you may know, has specialised in producing dramatised reconstructions of boxing matches, and having copyrighted their re-enactment of Jeffries-Sharkey ahead of Biograph, even had the cheek to sue the legitmate film producers for infringement!

But the greater crime has come from some renegade operators, among them Albert Smith of the Vitagraph company and James H. White of Edison, who smuggled cameras into the crowd, eluding the attentions of the Pinkerton men hired specifically to prevent such piracy, taking full advantage of Biograph’s lighting to produce short films of the bout. Vitagraph’s film is a wretched record of only a small portion of the fight (we have heard that they have attempted to put the film into a loop with the intention of fooling the gullible into thinking them are seeing multiple rounds) with the heads of the crowd obscuring the view. With what great irony is it for a festival of lost films that this pirate film survives, yet all posterity has of the Biograph film – the epic of its age – is a Mutoscope card or two, representing a few inches of a record that, as we know, could be measured in miles. And so, breaking all of the festival’s rules, our accompanying short is a film that does exist. Here is The Battle of Jeffries and Sharkey for Championship of the World (1899), produced by Vitagraph.

An extract from the pirated film of Jeffries-Sharkey taken by Vitagraph (the stills, commentary and music are all obviously later interpolations)

Despite the simulation and piracy, the Biograph company has enjoyed considerable success with The Jeffries-Sharkey Fight. Some say that it has brought in $200,000 at the box office, and if that is probably an exaggeration, it has undoubtedly further cemented the close relationship between the ring and the screen. However, commentators have noted fewer women attending screenings of the film that was the case for the Corbett-Fitzsimmons fight two years ago. Perhaps the novelty value has worn off. In the future, boxing films will be for fight fans only, and we suspect that they will become increasingly marginalised, after having played such a crucial role in building up an audience for motion pictures when they first appeared.