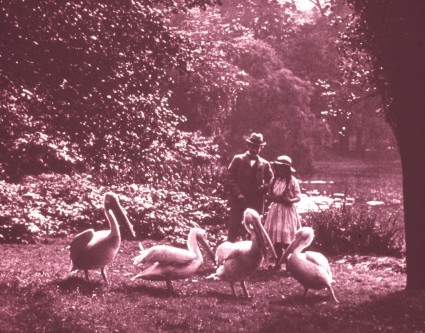 I’ll have more to say about this event nearer the time, but here’s a general notice that there is to be a screening of The Life Story of David Lloyd George (1918, d. Maurice Elvey) at the British Library on Sunday, 15 February. This key film in British film history tells the story of the Libreral Prime Minister David Lloyd George, focussing on his engagement with the major issues of the day, from his opposition to the Anglo-Boer War, to the introduction of old age pensions, to his activity as Minister for Munitions in the First World War, leading to his appointment as Prime Minister midway through the war.

Two things are particularly remarkable about the film. The one is mystery surrounding its disappearance – the film was never exhibited before the public, and there seems to have been a government pay-off to prevents its screening, after which the film disappeared for decades until its happy rediscovery in 1994. Secondly, there is its exceptional quality, both as ambitious human/political drama, quite unlike anything one might normally expect of a British film from this period, and then the sheer quality of the print, which is a joy to behold. The film has not been shown in London since its premiere (literally so) in 1996, and if you can get to see it I really recommend doing so. It is an epic without histrionics, prosaic and visionary at the same time.

The film will be accompanied by Neil Brand on the piano, and the screening will be introduced by television historian Dan Snow, who happens to be Lloyd George’s great-grandson. The reason for putting off more information at this stage is the happy news that the National Screen and Sound Archive of Wales is publishing its long-promised DVD of the film next month (with Neil Brand score), coinciding with the screening.

The film is being shown as part of the British Library’s Taking Liberties exhibition (on the history of civil liberties in Britain). The screening runs 14.00-17.00 (with interval) at the Conference Centre, British Library,tickets priced £6 (concessions £4). More information on booking here.

As said, more on the background to the film when the DVD comes out. Meanwhile, David Berry’s book, David Lloyd George: The Movie Mystery gives the full history behind an exceptional film.