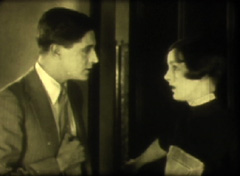 Another British silent has been issued on DVD (see the post on A Cottage in Dartmoor for a round-up of which British silents are currently available on DVD). Sunrise Silents have released The Vortex (1928), Adrian Brunel’s film, made for Gainsborough, of the Noël Coward play, starring Ivor Novello and Willette Kershaw.

Who she? Adrian Brunel, in his autobiography Nice Work, tells his usual tales of battles with the philistines that generally ran things in British films at that time (not like that now, of course), and tells this tale of working with the stage actress, who was chosen after forty others were considered for the role (including Edna Purviance, who turned them down):

Finally we chose Willette Kershaw, the American stage actress. Physically she was ideal; she was pretty, and her doll-like face appeared youthful in a way the part demanded. She was a strange creature, rather pathetic, rather lovable and not quite real. She never seemed to eat – at least, not solid foods. Her diet consisted mainly of vegetable extracts pellets.

It was her first film and a trying ordeal for her. When she had been rehearsed and all was set for taking the scene, she would swallow one of her little pills, and I would give the word go. For the first five seconds of very scene she would be detached and miles away; then she would come to, performing excellently for about twenty seconds, when she would begin to sag. Naturally, therefore, I made her scenes as short as possible, but there was that lag in her attack and very often that sagging at the end.

Brunel then goes on to write about how he saved her work in the editing, only to have the editing of the film taken away from him. Brunel is wrong is saying that it was her first film, as IMDB gives three credits for her in the 1910s. But it was her last film. The play The Vortex was highly controversial in its day, for its allusions to drug addiction and implications of homosexuality – needless to say, the film version is heavily bowderlised.

Other British silents available from Sunrise Silents are Piccadilly (1929) and She (1925).