As evidence of the value of Live Search for searching across the texts of books digitised by the Internet Archive (see previous post), here’s a passage from The Nightside of Japan, by Taizo Fujimoto, published in 1914. It’s a travel book on Japan written for a Western audience by a Japanese writer, and it includes this marvellously vivid portrait of attending a cinema show in Tokyo at this time, complete with benshi narrator, interval acts and food sellers. 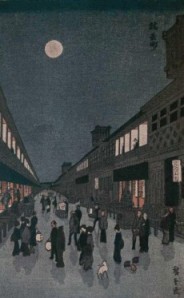 The Asakusa is the centre of pleasure in Tokyo. People of every rank in the city crowd in the park day and night old and young, high and low, male and female, rich and poor. It is also a haunt of ruffians, thieves, and pickpockets when the curtain of the dark comes down over the park. All houses and shops along each street in the park are illuminated with the electric and gas lights. The most noisy and crowded part is the site of cinematograph halls. In front of a hall you see many large painted pictures,
illustrating kinds of pictures to be shown in the hall, and, at its entrance, three or four men are crying to call visitors: “Come in, come in! Our pictures are newest ones, most wonderful pictures! Most lately imported from Europe! “Men of another hall cry out: “Our hall gives the photographs of a play performed by the first-class actors in Tokyo; pictures of the revenge of Forty Seven Ronine!” Tickets are sold by girls in a booking-box near the entrance of each hall; they are dressed in beautiful uniforms, their faces painted nicely, receiving guests with charming smiles. Most of the Japanese carry geta (clogs) under their feet, instead of shoes or boots, and specially so are the females. When you come into the door of a hall, tickets are to be handed to the men, who furnish you zori (a pair of straw or grass-slippers) in place of your geta, and you must not forget to receive from them a wood-card marked with numerals or some other signs the card being the cheque for your clogs. When you step on upstairs you are received by another nice girl in uniform, who guides you to a seat in the hall. Now the hall is full of people; it seems that there is no room for a newcomer, but the guide girl finds out a chair among the crowd and adjusts it to you very kindly. Pictures of cinematograph are shown one after another, each being explained by orators in frock or evening coat. Between the photograph shows performance of comic actors or jugglers is given. After the end of each picture or performance there is an entr’acte of three or five minutes, and in this interval sellers of oranges, milk, cakes, sandwiches, etc., come into the crowds, and are crying out: “Don’t you want oranges? Nice cakes! New boiled milk! etc., etc.” The show of cinematograph is closed at about 12 P.M., and all people flow out of the hall. Where will they go hence? Of course most of them go to their home, but a part of them young fellows among others runs to the Dark Streets of the park, or Yoshiwara, the licensed prostitution quarter near the park.

The Nightside of Japan is available from the Internet Archive in the usual range of formats (PDF, DjVu, TXT), and contains a few more references to cinematographs. More such gems as I find them.

The British Library (the noble institution where I happen to work) has been engaged for some time in a major project with Microsoft digitising some 100,000 books from the nineteenth century. Around 30,000 of these have now been made public available through Microsoft’s Live Search facility (to UK users only). I haven’t investigated this collection to see what possible texts on moving images it might contain, but the news has drawn my attention to Live Search as research source, which I’d quite overlooked.

You will find many digitised historical texts there, as well as current texts where there is limited access (e.g. to 10% of the content), much as you do with Google Books. In truth, the two resources offer much the same results and extras, but I find Live Search superior for the clarity of layout, ease of navigation, the linkages offered, and the word searching. Click in a search term such as ‘cinematograph’ – 1,860 hits – and for each title you get the book record, publication information, hyperlinks to where the search term appears in the digitised text, links to World Cat (if you want to find it in a library somewhere), and where available the opportunity to download the book from the Internet Archive. It is this latter option that particularly appeals, because it offers a far better means to search through texts on the Internet Archive than the Internet Archive provides itself (there you can only search titles and a limited synopsis). Hence many more titles turn up with relevant material for early film studies, including texts not directly about the movies but which have handy incidental information. I’ll be bringing you the results of some of these in future posts.

Update (May 2008): Microsoft has just announced that it has withdrawn Live Search Books, as well as winding down its book digitisation programme. More information here. Sorry.