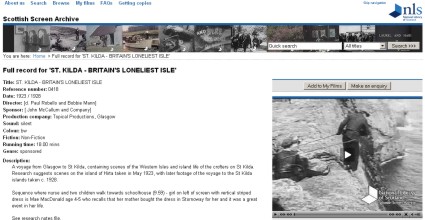 The Scottish Screen Archive has released some 1,000 film clips on its impressively-redesigned site. The SSA is Scotland’s national film archive, now part of the National Library of Scotland. It has an excellent record of preserving, contextualising and making accessible a national moving image heritage to a multiplicity of audiences. This latest resource comes courtesy of the Heritage Lottery Fund, and present clips from the 1890s to the 1980s, all integrated into their existing catalogue. The searching and browsing (by place, subject, biography and decade) are all exemplary, and the catalogue descriptions are spot on.

So, what is here for the silent era? Well, sixty-two clips, all of them non-fiction titles, from 1897 onwards, including many classic gems. For instance, look out for Lord and Lady Overtoun’s Visit to Mcindoe’s Show (1906), a rare early film of the outside of a fairground bioscope show; Dr Macintyre’s X-Ray Film (1896/1909), examples of the X-ray cinematography of Dr John Macintyre; several examples of Scotland’s own silent newsreel, Scottish Moving Picture News (later called British Moving Picture News); the civic record, Glasgow’s Housing Problem and its Solution (c.1919); a family holiday home movie from 1927; film of the building of the Ritz Cinema, Edinburgh in 1929; and St Kilda – Britain’s Loneliest Isle (1923/1928), a classic picture of life on the remote island while it was still inhabited by humans.

Social films, city films, newsreels, home movies, charity films, advertising films, interest films, documentaries – this is a marvellous collection, not just of Scottish life but of the multifarious forms of the non-fiction film, demonstrating for our period what an important part it plays in what should be our understanding of the silent film overall – somehing of the people, for the people. Go explore.