The Angel cinema in Islington, 1917

Hot on the heels of that last post on the East Finchley Phoenix comes news of a one-day event at Birkbeck College on London’s screen history. Organised by the University of London Screen Studies Group, in association with the London Screen Studies Centre, Birkbeck College and Film Studies journal, the event on Friday 14 March brings together a range of recent work on London’s heritage of film production and particularly reception. Here’s the programme:

The programme has been published a bit late in the day, but it’s a terrific line-up (your humble scribe notwithstanding), so do come along (there’s a small charge for tea and coffee) and see if we can get the audience to outnumber the speakers, at least by a little bit.

March 6, 2008 By urbanora in Cinemas, Screenings 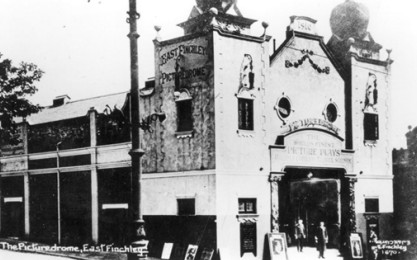 The Picturedrome, East Finchley, from http://www.phoenixcinema.co.uk

The Phoenix in East Finchley is believed to be Britain’s oldest continuously running cinema. It was founded in 1910 as the Picturedrome and has operated as a cinema ever since. It has been independently owned for most of that time, and after being known as the Coliseum and then the Rex it became the Phoenix in 1975. It now run by a non-profit-making trust and is a Grade II listed building.

This independent cinema proudly keeps up a tradition of showing independent films, and is now looking back to its roots by showing a season of silents, Into Great Silents – The Best in Silent Cinema. So do go along if you can to support them – on Sunday 9 March they are showing Alfred Hitchcock’s The Lodger, accompanied by Ivor Montagu’s Bluebottles, with piano accompaniment by Stephen Horne and an introductory talk by film historian Gerry Turvey. Later screenings will be Sunrise (8 June), Pandora’s Box (21 September) and Battleship Potemkin (28 November).