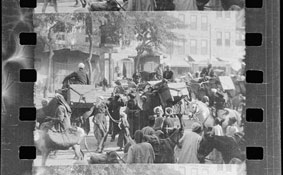 One of the ‘Bible Lands’ films discovered by Lobster Films, from http://www.cinetecadelfriuli.org/gcm

In March of this year, someone spotted a small can of film in an antique shop window. It had the words ‘Collection ELGE’ on the can, indicating a Gaumont film (from the letters L.G. for Léon Gaumont). The discovery came to the attention of film historian Sabine Lenk, who in turn alerted Lobster Films of Paris, specialists in early film and inspired discoverers of the extraordinary. What lay within the antique shop, however, hinted at being their most exceptional discovery yet. There were ninety-three cans in the shop, the owner apologising that they were only negatives (!). They were Edison-perforation 35mm, some in ELGE cans, some in Lumière cans, with some shrinkage but little decomposition. And they appeared to date from 1897.

Films very rarely turn up these days from the 1890s, and when they do they tend to be in ones and twos. For ninety-three to emerge in one go is practically unprecedented. And there there was their subject matter. Handwritten titles on the opening frames indicated films taken in Nazareth and Bethlehem, and dramatised scenes of the life of Christ. Before a single film had been printed or viewed, it was clear that here was a truly major discovery.

Seven months on, and amazingly the collection was ready for exhibition at Pordenone. Inevitably enough, this being a collection of early, non-fiction films, the Verdi was less than full for this historic premiere. So there were folks who preferred their cappuccino to witnessing the most remarkable discovery of the festival, but more fool them. The rest of us heard an introduction from Serge Blomberg of Lobster, who said that the rolls of film bore number 1 to 203, with many missing. The films we were to see came from Palestine and Egypt. Other titles showing scenes in Turkey would be shown at a later date.

One of the ‘Bible Lands’ films discovered by Lobster Films, showing a funfair with swings, from http://www.cinetecadelfriuli.org/gcm

And so to the films. They were one-minute or so each in length, actualities of life in the Bible lands (as Lobster have labelled the films), very much in the Lumière style. Indeed, the films showed the sort of studied composition and coherent action encompassed within the frame and completed within the film’s duration that characterises Lumière productions. Some had two shots, some featured camera movement. They were all in superb condition. We saw camel drivers, a snake charmer (whose cobras tried to escape into nearby bushes and were hauled back, not best pleased), children dancing in front of the ruins at Luxor, street vendors in Cairo, an Arab street funeral procession, a funfair with swings pulled by ropes and a mini ‘big’ wheel, women drummers, men dancing, men and women making bricks, women preparing food, a panning shot of the Kedron Valley, women sowing seeds on horse-drawn ‘carts’ (they looked like sleds) outside Nazareth, and many more such scenes. Perhaps most impressive were the two or three films showing the shadouf being operated, the human-powered (usually child-powered) irrigation system with a bucket and a counterweighted arm. These were scenes that had gone on from centuries, millennia even, and here was the motion picture capturing them – in 1897 (or thereabouts), when in truth they could have been scenes from any time.

Following the actualities, we had the dramatic films. There were scenes from two lives of Christ – or at least, filmed in different locations. The first was clearly filmed in Palestine, presumably in Nazareth and Bethlehem themselves. These were brief scenes from the birth and childhood of Christ, extraordinarily featuring an Arab (Christianised?) Joseph and Mary. The Adoration of the Shepherds and then the Magi (not much difference between the two) took place by some steps, with a rough authenticity unlike any Nativity film you ever saw. Mary wore a large white shawl that covered much of her face. We saw further scenes with this couple, Mary on a donkey, the rest on the flight to Egypt, Mary breastfeeding her child, the toddler Jesus’s first steps (not a scene I remember from the Bible).

And then the backgrounds changed. The scenery became wooded, without buildings, and Mary, Joseph and Jesus (a young girl) were now played by white performers, with attitudes and iconography far closer to the conventional. These scenes appear to have been filmed in France, but they continued to surprise. We had an Annunciation scene with an angel Gabriel suddenly appearing (a trick effect unlikely to be as early as 1897), Joseph working at his carpentry, someone dropping a pot which the child Jesus then magically mended, Joseph rowing Mary and Jesus across a river, young girls dressed as angels joining Mary and Jesus. Most astonishing was the film where the child Jesus carried a cross, placed it upon the ground, and then lay down upon it. There is some precedent for this sort of intimation of the future on the part of the child Jesus in the Western art tradition, but it was still a mind-boggling feat of the imagination. 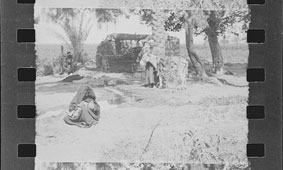 One of the ‘Bible Lands’ films discovered by Lobster Films, from http://www.cinetecadelfriuli.org/gcm

So who made these films, and who saw them? Although there is not certain evidence as yet, the most likely candidate is Albert Kirchner, also known as Léar. Kirchner was a French photographer and likely producer of risqué postcards, who is first recorded as having made a striptease film, Le Coucher de la Marie, with Eugène Pirou in 1896. Unblushingly moving from pornography to religion, Kirchner teamed up with a Catholic priest and educationalist, Father Bazile, to make short comedy films. In Spring 1897 he set off with one Father Bailly to film in Egypt and Palestine, returning to France to film a twelve-scene Life of Christ with Michel Coissac (a future film historian who wrote about this episode). This was the first-ever Life of Christ to be filmed, and it enjoyed huge popularity – the Reverend Thomas Dixon, author of The Clansman on which D.W. Griffith’s The Birth of a Nation would be based, exhibited it in America in 1898 – and was much imitated. Kirchner’s films were bought up by Gaumont, and some can be found listed in Gaumont catalogues. He then disappears from the historical record, but he may have died soon afterwards.

There was much excited discussion among the early film enthusiasts after the screening (there aren’t many of us who get wildly enthused by 1890s films, but we’re a dedicated breed). It seems unlikely that all the films date from 1897, given some of the sophisticated techniques on view at times, and we may have seen films produced by different hands. And so many questions. Why the two lives of Christ? Were the ‘authentic’ scenes shown in France, rejected by audiences, and scenes more in keeping with Western taste shot in their place? Or were the two lives really one and meant to be shown together, despite the changes in performers and costumes? Were the actuality scenes meant to be integrated with the dramatised scenes? We know that the films – assuming they are Kirchner’s – were popular, but what exactly did audiences see? It is only a few months since this extraordinary collection was discovered, and there is still a huge amount to be discovered. What is certain is that a gap in the history books needs to be filled, and we have a collection of views of life in Palestine and Egypt at the end of the nineteenth century which will not only excite the historians but enrich generations to come.

[Update (October 2008: The films are now known to have been made by the Abbés Mulsant and Chevalier in 1904. See Back to the Bible Lands post]

There were other films in the day, which I’ll touch on briefly. Two delightful Starewitch animations, Les Grenouilles Qui Demandent Un Roi (1922) caught the stern spirit of Aesop and La Fontaine very well, with fine comic glosses on the tale of the frogs who ask an exasperated God for a new king, eventually getting a stork which eats them all. La Voix du Rossignol (1923) was charming in its meticulously observed depiction of bird life. Der Kampf der Tertia (1929) was a German’s children’s feature film, directed by Max Mack and with beautfilly composed coastal scenes, about a group of schoolchildren who prevent a cull of cats in a neighbouring town being organised by Max Schreck (of Nosferatu fame). Happy, inconsequential stuff, though you couldn’t help but wonder what would be the fate of those bright-eyed youngsters ten years thence. All at Sea (1933), shown in the evening, was a home movie shot by Alistair Cooke (the future broadcaster) of a yachting trip he spent with Charlie Chaplin and an impossibly beautiful Paulette Goddard. Chaplin is seen impersonating Jean Harlow, Greta Garbo and the Prince of Wales (rather good), as well as going through a Napoleon routine. We also saw unpleasant details of a shark being caught, and the usual dull shots of ships in the distance which invariably fail enliven the home movies of rich or humble.

And so farewell to Pordenone for 2007. I left on the Thursday morning, and so missed the last three days, including the Corrick Collection of early films recently discovered in Australia, my favourite René Clair film, Un Chapeau de Paille d’Italie (An Italian Straw Hat) (1927), and the late D.W. Griffith film that I most admire, Isn’t Life Wonderful (1924). Ah well. If you want to find out more about the films on show at this year’s Giornate, the full catalogue is downloadable as a PDF (2.9MB), with marvellous detail, expertly edited as always by Cathy Surowiec. If you were at Pordenone and saw the films I saw and would like to make comments – or if you saw films I didn’t see and would like to tell us about them – please do so. And if you’ve never been to the Pordenone Silent Film Festival and these posts have made you think that perhaps you ought to one day – well, you’re right.