October 24, 2007 By urbanora in Comedy, Publications 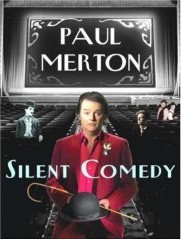 Well, as the Bioscope motors on past the 30,000-views figure, it’s hard to say which has been the most popular topic so far, but it’s probably either Albert Kahn or Paul Merton. Which is ironic, since Albert Kahn has been pursued for the Autochrome colour still photographs he organised rather than the films he commissioned, while Merton is anxious to take a back seat in promoting the work of the silent comedians he so admires.

The latest expression of this is his book, Silent Comedy, which has just been published. I’ve only thumbed through it in a bookshop so far, but what is immediately noticeable is what a wordy, conscientious and carefully-constructed work it is. Merton has paid his dues as a silent film buff, collecting 8mm copies from childhood, reading as well as watching all that he could, and he makes fulsome acknowledgment to Kevin Brownlow and David Gill for their television and restoration work, and to the works of Glenn Mitchell and Simon Louvish. Merton has clearly read a great deal, and the book goes into the personal histories of the silent comedy greats, as well as describing individual sequences in sharp detail. Anyone familiar with this territory will recognise much of the material, but it’s not meant for them. Merton is targetting his young audience, for whom Silent Comedy is a means of discovery, not confirmation of a well-known history. This is a subject that need discovering all over again.

This puts Merton in the awkward position of being the straight man, much as is going to be the case for his forthcoming Silent Clowns tour, where audiences may come to see Merton and his gags, but where Merton is anxious for them to see rather less of him and as much as possible of the films themselves. The book’s cover highlights the problem. Paul stands in the centre, his subjects in the background, but the book itself is organised the other way around.

Well, no matter, it’ll become a favourite Christmas present, and it’s a treasure trove of material that needs to be passed on to a new generation of enthusiasts. It’s also beautifully illustrated. It concentrates on the key names – Chaplin, Keaton, Lloyd, Laurel and Hardy – with little space given to the second tier of comics – Larry Semon, Charley Chase – and no mention at all of ‘minor’ figures like Max Davidson or any European comic except Max Linder (OK, you could argue that Chaplin and Laurel were European…). That’s a bit of a missed opportunity. But it serves a window on a lost world, which might just be that little bit less lost from now on.

Update: There’s a rather muddled (i.e. muddled in that it seems the reviewer can’t decide whether the book is good or not) but nonetheless intriguing review by James Christopher in The Times.

As initiatives such as the Crazy Cinematographe show and DVD are showing, the cinema came out of the fairground and its displays were seen by many as at one with freak shows, waxworks and performing animals. Just as many would probably say that this remains the case. Anyway, published this week is fascinating evidence of this parentage. The Society for Theatre Research has published The Journals of Sidney Race, 1892-1900: A Provincial View of Popular Entertainment. Sidney Race was a gas company clerk, living in Nottingham, who started writing down what he saw of life in the city, including its many public entertainments, notably the Nottingham Goose Fair.

From 1892 to 1900, Race recorded his impressions of bearded ladies, armless wonders, performing seals and dancing bears, with a keen eye for ordinary detail. And so, naturally enough, he took note of the cinematograph when it arrived in Nottingham. His first impression was one of scant glamour:

It was a dirty canvas tent with the sheet arranged by the entrance and the apparatus on an old box or two opposite it where it was worked by a grim looking individual as black as a stoker.

Later he recorded seeing a ‘Living Pictures’ in Long Row, Nottingham, where he recorded that:

an enormous number of photographs, taken consecutively, are whirled with the speed of lightning, before your eyes.

He saw films shown on the Edison Kinetoscope, trick films, dramatised scenes depicting the Greco-Turkish War (made by Georges Méliès), and numerous ‘exceedingly improper’ films’. He describes one film which evidently made a particular impression. It was called The Model’s Bath.

A woman – we could detected a large smile on her face – divested herself of her skirt and other outer objects of clothing and appeared in her white drawers and chemise … The girl was in a large white night dress which had fallen down from the breast disclosing a well developed ‘frontage’ … It was a dirty and suggestive exhibition though we really saw no indecency … I am very glad it was late at night when I saw the thing and that no lady was with me.

This remarkable find was made by theatre historian Ann Featherstone, University of Manchester, who came across the journal in the Nottingham Archives. It’s not unknown to film historians, as Vanessa Toulmin of the National Fairground Archive has used the journals, and cites several passages in her essay ‘The Cinematograph at the Nottingham Goose Fair, 1896-1911’, in Alan Burton and Laraine Porter (eds.), The Showman, the Spectacle & the Two-Minute Silence: Performing British Cinema Before 1930 (2001). She notes Race’s scepticism, indicating that early audiences were not always taken in by the trickery of some films as some have suggested, being able to tell a dramatised war scene from the likely reality, for instance.

I’ve not yet seen a copy of the publication, and it’s not easy to find information on it, not least because there’s nothing as yet on the Society for Theatre Research’s web site. There’s a citation for the original journal on the Nottinghamshire Heritage Gateway. I’ll put up more information when I find it.

Update (March 2008):
This message has come from the Journals’ editor:

Hello, I’m Ann Featherstone. I edited the Journals of Sydney Race, published by the Society for Theatre Research. I’ve been working on and around these fascinating journals for about 10 years (!), and I was really glad when the STR agreed to publish the selection. They are absolutely fascinating. Sadly, the book hasn’t appeared on the STR website – I don’t know why. But if anyone wants a copy, please email me. The cost is £11.50 (inc. p & p).