Queue outside the Teatro Verdi

It was during the Pordenone festival that Peter Greenaway announced the death of cinema. He wasn’t at the festival himself, but rather in Korea at the Pusan International Film Festival, giving a masterclass, but his words went round the world, as words will these days. Now, the unfortunate demise of cinema is commonly reported – Pordenone stalwart Paolo Cherchi Usai has written a book on the subject – and still the corpse keeps dancing around on our many and various screens, but Greenaway had an interesting specific point to make:

Cinema’s death date was in 1983, when the remote control was introduced to the living room … Bill Viola is worth ten Martin Scorseses. Scorsese is old-fashioned and is making the same films that D.W. Griffith was making early last century … Every medium has to be redeveloped, otherwise we would still be looking at cave paintings … My desire to tell you stories is very strong but it’s difficult because I am looking for cinema that is non-narrative.

Well, aside from the irony that Scorcese wrote the foreword to Cherchi Usai’s book (which admittedly is on the preservation of cinema rather than the present and future reception of cinema), is he still making films like Griffith, and what have we been doing these past few years at Pordenone sitting through the entire works of Griffith, the arch-master of narrative cinema? And why aren’t the art works of Bill Viola on show at this silent film festival?

Pordenone serves both an academic-historical and a sentimental function. It displays the films of the first thirty years or so of cinema with full archival and scholarly rigour – intelligently selected titles presented as products of national, artistic or thematic output, with credits, sources, informative writing, all backed up with the best-available prints shown in the best-possible conditions. It also caters to the nostalgic, with conventional, albeit brilliantly played and usually improvised, music rich in themes from the early twentieth century, and an abiding fondness for the stars of that era. On day three (October 8th), for instance, we were treated to a visit from Jean Darling, one-time star of the ‘Our Gang’ shorts, and the day before we spoke on the phone to Hungarian actress and singer Márta Eggerth to thank her for the film of her that we had just seen. Some acknowledgment of modern silents is made at Pordenone, such as the ingenious pastiches of the Wisconsin Bioscope, but Bill Viola would look sadly out of place. This is a festival which looks back – to the roots of cinema, and to a lost past.

And, however scholarly, this is an audience that likes its stories. Non-fiction does begrudgingly receive its due at Pordenone, but many choose the opportunity of such screenings to visit the restaurants and cafés. Narrative cinema reigns supreme, and much of the academic enquiry seems in any case rooted in the ways in which silent cinema discovered how to tell a story. It’s a fundamental need. Martin Scorcese is still making films in the way D.W. Griffith made them, because the audience still wants to identify people, their personalities, their predicaments, and what happens to them under crisis. I suspect that he would be rather flattered by Peter Greenaway’s comparison of him with D.W. Griffith. But I also suspect that Greenaway would be dismayed by Pordenone’s faith in a cinema held in amber.

But enough of such speculation – what of the immediate reality of sitting through another Griffith turkey, One Exciting Night (1922)? Word went round that this unfamiliar title was even worse than Dream Street, and at 136 mins it was going to be a grim ordeal. The film is a murder mystery set in an old dark house – a theme that is all too familiar now, but was fresh then. Griffith had tried to secure the rights to The Bat, a hugely popular play about a mysterious house with money hidden in it and many suspicious characters after it. Unable to afford the rights, Griffith simply rewote the story himself (using the pseudonym Irene Sinclair). The plot concerns an inheritance, an orphan (Carol Dempster), bootleggers’ loot, and a host of characters in the obligatory multi-roomed house, one of whom is a murderer. Title cards warn us of the mysteries that are to follow and how we should not reveal the identity of the murderer to those who might want to see the film after us. However, the identity of the murderer is glaringly obvious from the start, the plot is incomprehensible, and the handling of it inept. Griffith simply could not apply the necessary techniques for the mystery genre, filming in a flat, obvious style, failing to bring any clarity to a complex, incoherent plot, and leaving the audience both bored and bewildered.

And yet, and yet… Three quarters of the way through the film changes. The plot becomes so incoherent, the rushing between rooms of the increasingly panicky characters so manic, that all narrative coherence disappears and a kind of insane magnificence takes over. It’s at this point that a hurricane is introduced into the proceedings. There’s nothing to announce it – it has just built up in the background, and suddenly the characters are all outside and at the mercy of the wild elements. The expensive hurricane sequence was added on as an afterthought (clearly hoping to recreate the excitement of the final scenes of Way Down East), and has been much criticised as an illogical irrelevance. But to me it seemed to have a mad logic to it, and the pianist John Sweeney (on top form throughout the festival) certainly responded with gusto. One Exciting Night is a bad film by any conventional standard, but the way in which it tries to hold up a narrative, gives up, then welcomes in chaos, might have found it some favour with Peter Greenaway after all. Even Carol Dempster is not that bad. What is dreadful is more eye-rolling blackface ‘comedy’ from Porter Strong, which critics at the time shamefully found among the film’s best features.

OK, so what else did we have on day three? More of Starewitch’s stop-motion animations, from his Russian period: Strekoza i Muravei (The Grasshopper and the Ant) (1911) and Veselye Stsenki iz Zhizni Zhivotnykh (Amusing Scenes from the Life of Insects) (1912); and from his French period: L’Épouvantail (1921) and Le Mariage de Babylas (1921). L’Épouvantail mixes live action (Starewitch himself as a yokel, plus his daughter Nina) with puppet animation in a very effective mixture of film trickery and slapstick, while Le Mariage de Babylas is a delightful tale of a spoiled wedding among a child’s toys, which shows Starewitch’s agreeable lack of sentimentality – he is the Roald Dahl of animators, showing meanness and mischievousness as well as wide-eyed wonder in his childhood tales. 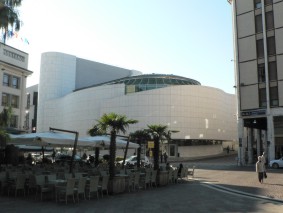 The Teatro Verdi and the Posta café, Pordenone

The main place for conversations and future plans is the Posta café, immediately across the street from the Verdi, and here I spent some time discusing with others the ongoing Women and Film History International project, co-ordinated by Jane Gaines, which is investigating women film pioneers from the silent era worldwide, in an ambitious programme of investigation and publication. The aim is not only to bring some unfamiliar names to the fore, but to challenge received ideas about the creative filmmaking process. Hopefully some major screen retrospectives will follow as well, and that we keep up this process of continually reinvestigating film history.

I kept ducking out of the German feature films to engage in such chats, alas, but it just isn’t possible to see everything and stay sane. I ducked out of Jean Darling and the ‘Our Gang’ shorts for reasons of taste, but it was back to the Verdi for four newly discovered Georges Méliès titles. How wonderful it is that new Méliès titles keep turning up, and that Pordenone always makes a special presentation of them. This year, the Filmoteca de Catalunya delighted us with Évocation Spirite (1899), La Pyramide de Triboulet (1899), L’Artiste et le Mannequin (1900) and especially Éruption Volcanique à la Martinique (1902), a spectactular recreation of the eruption of Mount Pelée and the destruction of St Pierre on 8 May 1902 with vivid hand-coloured explosions. It’s high time we had an up-to-date list of extant Georges Méliès films published.

I saw about fifteen minutes of the Soviet-Armenian comedy feature Shor I Shorshor (1926). Fascinating as its peasant comedy might have been, and intriguing as it was that such a picture of ‘backward’ rural lifestyles should be issued by a Soviet studio, I do object to being made witness to a comic routine which involved a live chicken being pulled apart by our two heroes. Animals overall had a hard time of it at the Giornate. I walked out.

The day for me was rounded off in happy style by René Clair’s Paris Qui Dort (1923-25), which I’d not seen before. It’s an odd film really – Paris is frozen by a mysterious ray, and only a few characters who were in a plane plus a man who lives at the top of the Eiffel Tower remain active because they were above the ray when it shot out. There is ample opportunity for satire, when the comic group discover that normal social rules no longer apply, but little is done with the concept. Instead it is the lightness of spirit which carries the film. It was surprising however to see such clunking continuity errors – several people could be seen walking around in the supposedly sleep-bound streets of Paris. Lastly we had a generally very funny Louis Feuillade comedy, Séraphin ou les Jambes Nués (1921), starring Georges Biscot. We cannot now of course make films about the social embarassment caused by someone losing his trousers, for today no one would blink an eye at Séraphin’s dilemma. Happily, we can still laugh at such films, because we understand the time and place. Imaginative sympathy – that’s what Pordenone audiences do best.