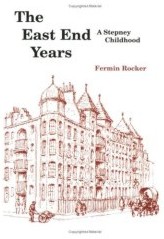 I’m a collector of memoirs (published and unpublished) of the film-going experience in the early years of cinema. One particular favourite from my work on London before the First World War is the memoirs of Fermin Rocker, The East End Years: A Stepney Childhood. I just came across a copy in Foyles today, and thought it worth sharing with you.

Rocker (1907-2004) led a somewhat unusual London childhood, in that his father was the German anarchist theorist Rudolf Rocker, while his mother was a Jewish-Ukranian anarchist-syndicalist, and their home was a focal point for revolutionaries. Kropotkin and Malatesta were family friends, and his childhood memories of life in Jewish Whitechapel are fascinatingly coloured by the radicalism that was all around him. This is evidenced by his memories of going to the cinema when very young (maybe six or seven), where his reactions to Westerns were at variance with most children:

High on my list of favourites were the Indians of North America, a people for whom I had an unusual degree of admiration and sympathy. Their picturesque appearance as well as their skill and bravery as hunters and warriors greatly impressed me. Coupled with this regard and affection was a strong feeling of outrage aroused by my father’s stories of the deceit and treachery practised upon them by the white man. I dearly wished that some day the redskins would be able to turn the tables on their white oppressors and drive them from the continent which their cunning and duplicity had helped them conquer …

… My partiality for the redskin was to have some unhappy consequences when I received my first exposure to the cinema. The Westerns, which featured rather prominently in the repertory of those days, invariably had the Indians getting the worst of it in their encounters with the white man, a headlong rout of the redskins being the usual outcome. I found it quite impossible to look on calmly while my friends were being massacred on the screen. Not being nearly so stoical as my Indian idols, I would raise a tremendous commotion and have to be taken out of the theatre to prevent things from getting completely out of hand. After a few experiences of this kind, it was decided not to take me to the “pictures” any more, a resolution I did not in the least regret.

Not every child liked going to the cinema in those days. Rocker much preferred Punch and Judy shows (“I sometimes wonder if the creator of the Punch scenarios was not an anarchist in disguise. His hero was forever running afoul of the law…”). He went on to become a noted artist and book illustrator, examples of which you can see find at www.ferminrocker.com.