April 26, 2007 By urbanora in Archives and museums, Black cinema 1 Comment 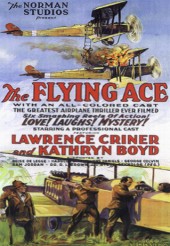 A project is underway to restore the Norman Studios in Jacksonville, Florida, as the Jacksonville Silent Film Museum at Norman Studios. The Norman Studios, run by Richard Norman, are most notable in silent film history for being where a number of feature films and shorts with all-black cast and crews were made during the 1920s. Only one title now survives, The Flying Ace (1926).

The studio complex still remains. A project to restore it begins next month and is due for completion in 2008. There’s background history on filming at Norman Studios and Jacksonville in general on the planned museum’s website, plus some terrific posters. The history of early black cinema has been much investigated of late, particularly the work of Oscar Micheaux, and the handful of surviving films given public screenings. The key source for finding out more is Pearl Bowser, Jane Gaines and Charles Musser’s Oscar Micheaux and His Circle: African-American Filmmaking and Race Cinema of the Silent Era (2001).