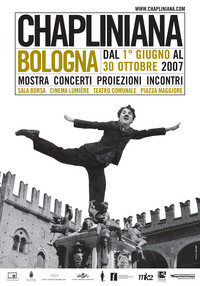 The Cineteca di Bologna in Italy is hosting Chapliniana between 1 June and 30 October 2007. This major celebration of Chaplin’s life and work will comprise an exhibition, Chaplin e l’Immagine (Chaplin in Pictures), at the Sala Borsa, Bologna; live orchestral screenings of The Chaplin Revue, City Lights, The Kid, Modern Times, The Gold Rush, The Circus and A Woman of Paris to be performed in Piazza Maggiore and the Teatro Communale during the summer evenings; and the majority of Chaplin’s films will be screened during this period, particularly during the Cinema Ritrovato film festival June 30-7 July 2007. The Cineteca is also working on the Chaplin Archive Database, which is logging the cataloguing, digitisation and preservation of the huge Charlie Chaplin paper archive.

There’s a Chapliniana site registered but nothing is on it as yet. 2007 is the thirtieth anniversary of Chaplin’s death, and a major revival of interest in his work and socio-cultural significance seems to be underway.

Update: The Chapliniana site is now active, and full of details, all of it in Italian.

The British Silent Cinema Festival starts tomorrow at the Broadway in Nottingham, and runs until Sunday. See you there on Saturday…

I’m currently reading The Eye: A Natural History (2007) by Simon Ings. It’s the story of the eye, of how we see, what we think we see, and how the eye fits into human history and the history of evolution.

This might not seem hugely relevant to the study of silent cinema, but it is. The study of motion pictures needs to take in the practialities (biological as well as psychological) of visual reception, and the study of early cinema is especially relevant because it embraces that extraordinary shift in perception when we were first offered seemingly wholly realistic images in motion as means both to be entertained and to learn about our world. It’s about the apprehension of truth and reality, and a basic grounding in optics wouldn’t go amiss.

The one thing most people know about film and optics is “the persistence of vision”: the visual trick by which we are supposed to be able to “see” motion pictures. This wholly fallacious explanation for why we can see films has been accepted as gospel for decades, and can be found in any number of film text books, yet it is quite wrong. There is certainly a phenomenon which is the persistence of vision, but it does not explain how cinema gives its impression of motion, or continuity. As Ings succinctly puts it:

Optical toys such as the Phenakistiscope and the Zoetrope exploited this propensity of the eye to be fooled by a rapid, intermittent procession of images, but the persistence of vision would in fact prevent our seeing motion on film, were it not for other forces at work: fusion, and something called the phi phenomenon, which also explain how we are able to see real movement. Again, as Ings explains it:

Humans are foragers; we take a more than usual interest in what things are. But even our eyes are tuned, first and foremost, to motion. In 1875 the Viennese physiologist Sigmund Exner showed that two brief, stationary flashes, provided they are not too far away from each other, are seen as a single object in motion. This habit of fusing stationary dots into moving objects makes a great deal of sense in nature, where prey and predators disappear and reppear constantly, as they move through grass, run behind trees, and peer around rocks. But the power of the phenomenon (called the phi phenomenon) will perhaps best be demonstrated the moment you set this book down and turn on the television. Every film and television programme ever made depends on phi. Both display images quickly enough for our eyes to read them as a single moving image.

It is not because one image persists and then is replaced by another, but because we cannot see that there is a space between those images that explains why we see ‘motion pictures’. And we can appreciate movies because, evolutionarily speaking, we’re all hunters or hunted.

Sigmund Exner I’ve not come across in any history of our understanding of how we see films, but he sounds to have been a remarkable person. As well as a major figure in our understanding of optics, he was the founding father of the world’s first sound archive, the Phonogrammarchiv in Vienna, founded in 1899 and still going strong.

Not all film histories have got it wrong over the persistence of vision. There are sensible accounts in Jacques Aumont’s The Image, Brian Winston’s Technologies of Seeing, and Michael Chanan’s The Dream that Kicks. There’s a helpful explanation of why the persistence of vision notion is a fallacy, written by Stephen Herbert, on the excellent Grand Illusions site.

Ings’ book is a first-rate work of popular science, made all the more readable by someone who is a novelist as well as a scientist. It also has good stuff on how we see colour, which has relevance for early films as well, but I haven’t got to that chapter yet. A further post will follow when I have…