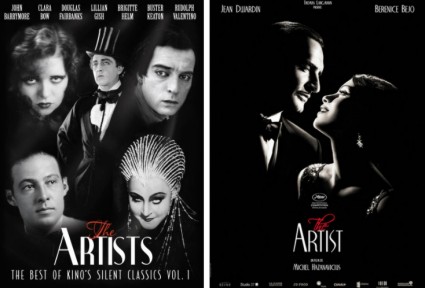 It is hard for any news provider to offer a full service at Christmas time, but even harder for the person trying to document silent films when there is only one story on everyone’s minds. The newsfeeds are choc-a-bloc with reviews of The Artist and thought pieces on what it all means when a silent film gets made in 2011. Part of the same silent mania is Martin Scorsese’s cine-nostalgic Hugo, and it only takes two films on a broadly similar theme for the world to discover a trend and seek to explain it. But we shall do our best to report what is worth reporting. And so we start with …

Silent films after The Artist and Hugo
Daniel Eagen at the Smithsonian’s rather fine Reel Culture blog takes a wry look at the impassioned debates both The Artist and Hugo have caused, viewing with amusement both those instant experts on silents who have hitched onto the bandwagon and the ‘film geeks’ who are agonising over the fine details. What is it that is so different about silent films? Eagen suggests that there probably isn’t anything different at all. Maybe they are just films, much like films of today. Read more.

Toronto Silent Film Festival
The schedule for the Toronto Silent Films Festival (one of the newer festivals out there) has been published. Lined up include Clara Bow in Our Dancing Daughters (1928), Murnau’s Tabu (1931), Rudoph Valentino in Blood and Sand (1922) and E.A. Dupont’s much-cited but not all that often seen Variety (1925). The festival runs 29 March-3 April 2012. Read more.

The birth of promotion
New York Public Library is currently hosting an exhibition on promotional and distibution materials from the silent era, entitled “The Birth of Promotion: Inventing Film Publicity in the Silent-Film Era”. The exhibition runs until January and has a cheerful promotional video. The New York Times has a fine survey of the exhibition and history its documents. Read more.

Life in the air
The San Francisco Silent Film Festival and the Pacific Film Archive in Berkeley are putting on a series of silent films devoted to aviation in its broadest sense. “Dizzy Heights: Silent Cinema and Life in the Air” takes place 23-26 February 2012 and has been imaginatively curated by Patrick Ellis, with such titles as High Treason (UK 1929), A Trip to Mars (Denmark 1918) and rarity The Mystery of the Eiffel Tower (France 1927). Read more.

Keaton in colour
Kino has been doing a great job releasing Buster Keaton’s work on Blu-Ray. Their latest release is Seven Chances (1925), with its Brewster’s Millions-style plot (Buster must marry before 7pm to inherit $7M) and the famous scene when Buster is pursued downhill by an absurd number of boulders. This ‘ultimate edition’ is of especial interest for including the film’s two-colour Technicolor opening sequence. It also comes with the classic shorts Neighbors (1920) and The Balloonatic (1923). Read more.

Now where have I seen that before?
A sixth item for once, and it’s another Kino release, this time a boxed set of some of its silent classics cheekily packaged to look like the poster for for a certain Oscar favourite and entitled The Artists. Full marks to somebody in their marketing team for the sheer nerve of it. Read more.

All these stories and more on our daily news service.