Detail from photograph showing Inuit man looking through a film camera in 1929, from the Library and Archives Canada collection

All of these records point to actual digital objects, and on first inspection this looks like the complete digital library for Canada. A second look tells us that this is not quite the case, since some of the those libraries have only provided access to selected items from their digital collections (so Library and Archives Canada has contributed “part of their MIKAN collection, a wide-ranging repository of Canadian images, covering many aspects of Canadian life between 1850 and 1950”). But others have been more comprehensive, and in any case much more content promised in the future. So the result is much like the European Union’s Europeana (recently reviewed by the Bioscope), a portal to digital content accessible on the sites of individual institutions, selectively but handily made available through the one portal. The records on the portal itself are brief, with links taking you to the descriptions and the digial objects themselves on the sites of the contributing organisations. 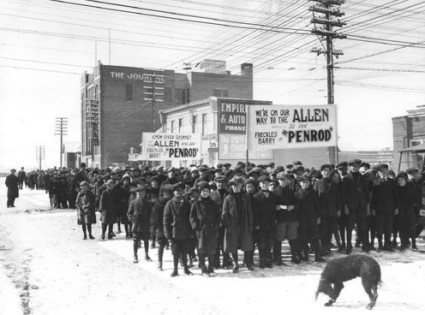 OK, so we know what we’re dealing – now is it any use for researching our subject of silent films? The answer is yes, though the records available so far aren’t quite as extensive as might have been hoped. Searching for our usual test term of ‘kinetoscope’ brings up a measly two results – and that for the same book appearing twice. Trying ‘cinematograph’ yields 36 results, ‘cinema’ gives us 545 (narrowed down to 24 for a date range 1900-1930), ‘motion picture’ provides a more productive 95 (1899-1930 date range). Searches can also be refined by medium and contributor, and sorted by date and relevance.

And yet what you can find there is frequently fascinating, because you are being pointed to such a variety of original documents: books, official papers, photographs, letters, magazine articles, scores, video files and more (mainstream newspapers do not seem to be included). Some quick searches three up a letter from a Canadian soldier based in France in 1917 writing home to his mother to say he is about to see a Chaplin film and The Battle of the Somme; edition no. 1 of of Le panorama: le seul magazine en langue française consacré aux vues animées from 1919; an account of an 1899 screening before 600 doctors in Paris of a film of an abdominal hysterectomy made by Eugène-Louis Doyen, from the journal Maritime Medical News; and a marvellous set of photographs from Glenbow Museum of cinemas in Edmonton in the early 1920s showing how they promoted various films (such as Douglas Fairbanks in The Three Musketeers) (search under ‘motion picture’ and Alouette Canada collection).

Group of cameramen outside the Canadian Government Motion Picture Bureau, Ottawa, in 1923, from the Libraries and Archives Canada collection

It should be noted that some of the digital resources, particularly books contributed by the University of Toronto, are not accessible to general readers but only to Canadian users from higher education institutions.

Anyway, this is a very helpful route in to some rich Canadian resources. Go explore.

P.S. The Bioscope has previously covered other, film-specific Canadian resources. Here are the links: