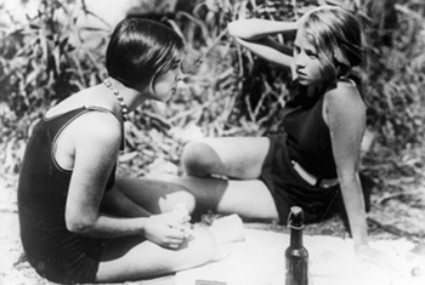 People on Sunday (Menschen am Sonntag)

Killruddery Film Festival
Ireland’s Killruddery Film Festival, with its strong emphasis on silent film, returns 10-13 March 2011 and the programme has just been announced. Highlights include The O’Kalems in Ireland, La Roue, White Shadows in the South Seas, 7th Heaven, Early Masterpieces of the Avant Garde, The Garden of Eden, Regeneration, People on Sunday and Ireland’s Other Silent Film Heritage (the Irish in Early Hollywood), an illustrated lecture by Kevin Brownlow. Read more.

BBC permanent
It hasn’t much to do with silent films, but the BBC’s quiet announcement of a change in the Service Licence for its TV channel BBC4 and radio channels Radio 3 and Radio 4 is highly significant for access to audio-visual archives online. All three will now all have the the ability to offer programming on-demand for an unlimited period after broadcast, instead of the limited period at present. This is the start of something big – the permanent online archive for broadcast content. Keep watching. Read more.