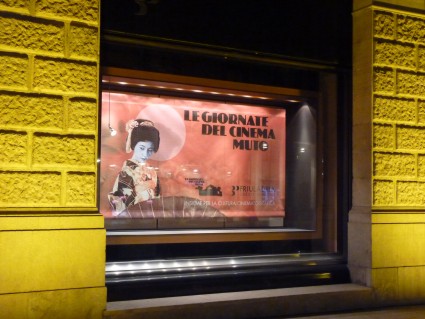 And then it rained. There’s always one day of heavy rain at Pordenone (it is quite near the Alps, after all) and on Tuesday October 5th it came down in torrents. This was certainly a day for sheltering in the cinema and viewing everything that came up.

Unfortunately that meant starting at 9.00am with another selection of Boireau films. As noted in day three, the French comedian André Deed’s second stint as Boireau (1911-1914) produced work that was markedly inferior to his time in Italy playing the character Cretinetti. This second selection sufered from the same frantic gesticulation and body-bending from a performer who did not know how to stand still. Une Extraordinaire Aventure de Boireau (France 1913) stood out for the extraordinary comic conceit of having two men welded together after a heavy weight falls on top of them. One, Boireau, adapts to his new circumstances with zest; the other is wretched and complains all the time. It wasn’t exactly funny, but it was memorable. I kept thinking of the British comedian Norman Wisdom, whose death had just been reported, someone who once had audiences tearful with laughter only to live on to a time when audiences could only look on his work with bemusement and embarassment. What happens to humour when it isn’t funny any more? We just want to turn away.

And then we got a series of Calino films starring Roméo Bosetti, and Boireau looked like a comic master once again, at least by comparison. Enough of all this, let’s have some challenging Soviet documentaries.

Even at this short distance in time, I have little memory left of Mati Samepo (Their Kingdom) (USSR 1928) a 22-minute fragment from a five-reel documentary compilation of Georgian newsreel material made by Mikhail Kalatozov. All that remains are some impressions of satirical intent about oil in Kalatozov’s native Georgia, and a noticeable number of stray dogs. Unforgettable, however, was his documentary Jim Shuante (Salt for Svanetia) (USSR 1930). This was a strange film about a strange corner of the world. Svanetia is a remote area of Georgia, high in Caucasus mountains. The areas is inhabited by the Svans, and in its focus on their hard lives and distinctive cultural practices, it was another in series the films of anthropological interest that featured throughout the festival. However it was far from being a conventional, fact-based documentary. Some of the customs featured were a fiction – such as turning pregnant women out of a house to give birth, which was the practice in another region of Georgia but not in Svanetia. It showed life at its most rudimentary and functional, with miseries piled upon miseries to the point where it was almost comical (I was reminded of Buñuel’s Las Hurdes which similarly piles on the wretchedness beyond the point of sympathy). The images were often brutal or earthy, and they were always astonishing composed, but they told you nothing about the people. They were merely ciphers – and ciphers for a society that bore only a tangential relationship to reality. They existed to serve as subjects for an exercise in filmic style, not as people in their own right. The film did not inform; it exploited. It was the antithesis of the model anthropological film. 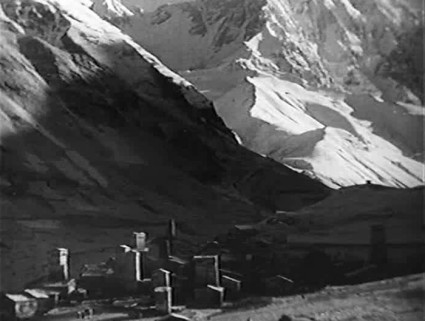 Salt for Svanetia (1930), from Wikipedia

Nor did it work as piece of Soviet propaganda. The ostensible reason for making the film was to show how a road-building programme was bringing the much needed salt to Svanetia and connecting it to the outside world, ensuring its modernisation and survival. But, as the programme note told us, the road-building was fiction too, and the whole message felt tacked on, as no doubt it was to please the party critics and censors (though they suppressed the film anyway). For Kalatozov the poetics of the image is all, and one comes away with visions of sun and shadow sweeping over the mountain sides, the stark villages with their tall towers and seemingly no people out and about, and unanswered questions about how the people were persuaded to play for the cameras, and whether actors were used. Salt for Svanetia is an amazing film, but not an honourable one.

And they we were back in Japan. I missed a couple of short films, but then settled down for the afternoon’s epic, the 188-minute Ginga (The Milky Way) (Japan 1931), directed by Hiroshi Smimizu, he of the restless camera and uncertain directorial purpose. Or at least that’s how he had seemed so far, but for Ginga he reined in the gimmicks, aside from some deft lateral tracking shots which acted as an effective visual motif. The plot was pure soap opera once again. It concerned a daughter of a businessman who marries her seducer to avoid social disapproval, a storyline that was starting to get a bit too familiar, while the passive suffering of Japanese women was starting to grate just a tad. But in truth the plot was not that important, or rather the various relationships were obscure (at least to these Western eyes), and you just surendered to the gentle style and the astute balance of understated realism and melodrama. If there had been silent television, its dramas might have unfolded much like Ginga.

There then followed a pleasant interlude – an Irish television documentary on archivist and film historian Liam O’Leary, At the Cinema Palace: Liam O’Leary (Ireland 1983). This was a delightful account of the man who virtually single-handedly established the idea of Irish film history as something to document and the need for an Irish film archive. He also worked for a time at the British Film Institute, and there were some gorgeous archive images – David Robinson (the festival director) sporting a florid 1970s moustache, David Francis (one-time curator of the National Film Archive) with a truly terrible jacket, and such a young Kevin Brownlow (O’Leary introduced Brownlow to Abel Gance when no one at the BFI was available to greet the great silent director in Britain. What must Gance have thought when the BFI sent a 17-year-old schoolboy instead?). A film about a man whose purposeful passion for film spoke to every film archivist in the audience.

Charlie Chaplin (left) in A Thief Catcher, courtesy of Paul Gierucki and Slapsticon

In the evening we were treated to two of the most notable ‘lost’ film rediscoveries of the past year. First up, A Thief Catcher (USA 1914). Yes, at last a chance for us on this side of the pond to see the sensational discovery, made by Paul E. Gierucki, of a previously unknown performance by Charlie Chaplin in a Keystone comedy. It was known – because Chaplin said so in an interview – that he had appeared uncredited as a Keystone Kop early on in his film career, but never before had anyone rracked down such an appearance. A Thief Catcher is thought to have been either his second or fourth film for Keystone in terms of production (the catalogue told us it was shot 5-12 and 25-26 January 1914, with Chaplin’s bit probably in the latter) and the fourth in terms of release (19 February 1914). But enough of the historical minutiae – is it funny?

You bet it is. Not outstandingly so, but it gained more laughs in eight minutes than poor Boireau had managed to raise in two or three hours. It’s all in the cutting. The film is a typical breakneck speed Keystone offering, with routine knockabout elevated to something special simply by the speed of the action and the deftness of the edit. Boireau showed us comedy still rooted in the stage, the comic business contained within the single shot. Keystone gave us cross-cutting, the comedy of consequences, as each shot played off against the previous one. Ironically the film’s star, Ford Sterling, outdid André Deed in face-pulling, and probably no unfunnier man ever graced the cinema screen. But Chaplin was on the ball as a performer right at the start. He plays an inspector who investigates a shed where Sterling, playing a sheriff, has been imprisoned by three robbers. In his two-minute cameo (he appears briefly at the end as well) Chaplin gives an expert display in comic bemusement, ending up being knocked out by Sterling for his pains. The moustache is there, the baggy clothes, even a hint of splayed feet. It was a magical moment when he ambled on screen (the audience cheered). A Thief Catcher easily lived up to expectations.

Next up, after a trailer for the otherwise lost John Ford film Strong Boy (USA 1929) was an entire Ford feature film not known to exist until it turned up in New Zealand recently, Upstream (USA 1927). This was a comedy-drama set in a New York boarding house full of ‘resting’ actors, one of whom (Earle Foxe) unexpectedly gets an invitation to play Hamlet in London, because he comes from a great line of actors whose name he has inherited but with none of the necessary talent. But the plot didn’t matter much; what made Upstream such a delight was the series of comic vignettes of down-on-their theatrical types – knife-thrower, a pair of comic dancers, an old Shakespearean hand – a in a zippy, joyous opening sequence that was J.B. Priestley on roller skates. It showed you everything about why American cinema conquered the world – much as A Thief Catcher did, in fact.

It’s a minor film for all that, which ends rather abruptly with the rejection of the insufferably pompous Foxe character by his former colleagues, and one sensed that had they only had a stronger cast then the film could have been spun out to twice its length, because we wanted to know more about the characters. So, a lot of fun, a film to chalk up for those with an interest in Shakespeare on film (Foxe’s Hamlet mines every cliché about theatrical ham), and a film which does John Ford’s reputation no harm whatsover.

In what was a peach of an evening’s programming, things were rounded off with me for one my all-time favourite films, Shakhmatnaya Goryachka (Chess Fever) (USSR 1925). This delirious comedy is terrific if you are a silent film fan, but if you are a chess fan as well, you’re in heaven. You get all startstruck in the opening sequence – look, there’s Réti! And Torre! And Marshall! And Grünfeld! And, wow, Capablanca! Chess Fever was shot by Vsevolod Pudovkin during the international chess tournament held in Moscow in November 1925. Its slight plot revolves around a man so obsessed with chess (even his socks have black-and-white squares) that he forgets his own wedding, but chess brings the two hearts together in the end. It’s filled with a succession of superb sight gags, where all of Moscow is shown to be chess-mad. It culminates with the great José Raúl Capablanca himself, the world chess champion, who appears in the film when the frustrated fiancée accosts him, though he was not aware that a dramatic film was being made with himself as a crucial character. Günter Buchwald (on top form all week) provided an appropriately lively score for violin, piano (he played both), double bass and drums, revealing himself in the catalogue to be a chess enthusiast as well. And has there ever been a better closing line for film than, “Darling, let’s try the Sicilian Defence”?

After all that I wasn’t much in the mood for Lev Push’s Gypsy Blood (USSR 1928) – some film titles make you fear the worst – and I called it a day.