Last night I attended the premiere of The Great White Silence at the London Film Festival. The Great White Silence is a documentary feature, released in 1924, which documents the expedition of Captain Robert Falcon Scott to reach the South Pole. He of course failed, and died with four companions on his wretched journey back from the Pole, having discovered that he had been beaten into second place by Roald Amundsen’s Norwegian party.

But Scott had romance on his side. He left behind a diary of exceptional artistry and poignancy, which helped enshrine his legend and turn vainglorious failure into the epitome of noble, patriotic self-sacrifice. And he had ensured that future generations would become engrossed in his story through what they could see as well as what they could read. Herbert Ponting (1870-1935) was taken on as expedition photographer and cinematographer, both for documentary purposes and because the sale of photographic and cinema rights helped pay for the expedition (40% of the profits from the films’ exhibition went to the expedition, 40% to the Gaumont company for producing and distributing the film, and 20% to Ponting).

Ponting was a still photographer of renown, who had done notable work in Japan. But he had never handled a cine camera before. He turned out to be a cinematographer of uncommon ability. Kevin Brownlow pays him the highest of accolades in The War the West and the Wilderness by comparing his work that Mary Pickford’s cinematographer:

Herbert Ponting was to the expedition film what Charles Rosher was to the feature picture – a photographer and cinematographer of unparalleled artistry.

Iconic image of the Terra Nova, from The Great White Silence

The BFI National Film Archive has restored the 1924 feature because the footage no longer survives in the original forms in which it was released. The release structure of Ponting’s films was determined by the nature of the expedition and a need to keep up audience interest over the two years that the expedition would take. Ponting joined Scott’s ship the Terra Nova in New Zealand in November 1910. He took an initial 15,000 feet of negative film with him, along with Prestwich and Newman Sinclair cine cameras (the latter’s manufacturer Arthur S. Newman gave Ponting intensive instruction in its use, and added special ebonite fittings to prevent Ponting’s fingers from freezing to the camera). He shot and developed 8,000 feet of this on site (Cape Evans) before the Terra Nova returned to New Zealand in January 1911. This film was delivered to Britain, and edited by Gaumont into a 2,000 foot release (lasting around 30 minutes) entitled With Captain Scott, R.N. to the South Pole. This was first exhibited in November 1911. Ponting’s second batch of film was released by Gaumont as the ‘second series’ of With Captain Scott R.N. to the South Pole, into two 1,500 foot parts, first shown in September and October 1912 respectively, and which featured the final scenes of the polar party, included sequences where they demonstrated sledge-hauling and life inside their tent. By this time Scott and his final polar party were all dead, and news of Amundsen’s success in reaching the pole first dented the film’s commercial appeal. One of the most haunting passages of The Great White Silence is where four of the final five-man party illustrate how they were going to journey across the ice, including scenes of them huddled together for warmth in a tent. Scott, Birdy Bowers, Edward Wilson and Edgar Evans – but not Titus Oates – all appear in a sequence which was produced in anticipation of triumph but now looks like an uncanny intimation of their fate. 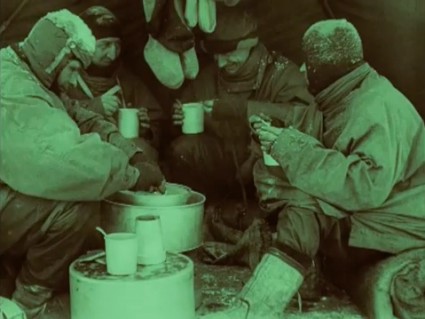 The tent scene from The Great White Silence, with (left to right) Evans, Bowers, Wilson and Scott

The bodies were discovered in November 1912 and the news reached the outside world in February 1913. Ponting then began to devote his life to the promotion of the Scott legend, and to the recouping of his investment, because in 1914 he purchased all rights in the film from Gaumont for £5,000. This he did against a waning audience interest, and much of the bitterness that Ponting was to feel in his latter years was due to the public’s insufficient awe at a story which he progressively built up and romanticised, as the Scott story evolved into myth. The films were re-edited and released in 1913, after Scott’s death had been reported, as The Undying Story of Captain Scott.

Ponting then lectured with the films constantly, giving a Royal Command performance in May 1914, where King George V declared that:

I wish that every British boy could see this film. The story should be known to all the youth of the Nation, for it will help to foster the spirit of adventure on which the Empire was founded.

He continued to show his films throughout the First World War, emphasising the call to patriotic sacrifice, but now to dwindling audiences. In 1924 Ponting re-edited the films once more as a feature-length documentary, The Great White Silence, which followed on from the 1921 publication of his book The Great White South. The film was 7,000 feet long (around two hours in length), and released by the New Era company. Reviews were complimentary, marvelling at the hardships endured, and praising both the film’s patriotic virtues and “extremely clever studies of Antarctic life”, while pointing out (a little meanly) that the final scenes were, of necessity, heavily dependent on still pictures, diagrams and intertitles. Scott’s adventures were already of another age, and the film was not a notable success.

Ponting failed in his subsequent attempts to sell his films to the nation, an appropriate film archiving body not existing at that time, and in 1933 he produced a sound version of his films, now entitled 90º South, released by New Era once again, and whittled down to 75mins. Ponting himself provided the film’s commentary, and years of lecturing to these images tell in his polished and succinct words. This time the reviews were more enthusiastic, as reviewers newly aware of the documentary as an art form rightly praised Ponting’s artistry.

90º South is the form in which we have been familiar with the footage in recent years, because the BFI did not have a complete viewing print of The Great White Silence. But with material from a release print held in the Netherlands, and with reference to Ponting’s uncut footage, an exceptional restoration has been produced. The images really do look like they were shot yesterday. The clarity of the faces of the explorers – Wilson, Evans, Bowers, Oates and the rest – is a revelation. The grading is a tour de force. Perhaps most notable is the colour tinting, introduced digitally by following Ponting’s own instructions (written onto gaps in the original footage), which results in the familiar polar scenes unfolding in strange, otherwordly amber, blues and greens. We see the familiar anew.

The film itself is not a documentary as we now expect. It was probably released by Ponting because he had been encouraged by the success of Robert Flaherty’s Nanook of the North (1922), but if that film ushered in the new form of documentary filmmaking, Ponting’s film is the ultimate expression of an older form of documentary, one with its roots in the magic lantern lecture. Ponting was a practiced lantern lecturer before he joined Scott, and entertained the expedition party with lantern shows during the Antarctic winter. Throughout his work on the Scott expedition, Ponting imagined how he would present such scenes to an audience back home, and selected, composed and arranged his material accordingly. This included a marked emphasis on animals, particularly penguins (inevitably), to what seems to us the surprising detriment of the human story, but Pointing knew his market and he balances his material admirably. Certainly the 2010 audience seemed as engrossed in seals, penguins, killer whales and skuas, and as susceptible to their anthropomorphic appeal, as those in 1912.

Once Scott had died and Ponting went on the road with the films, he lectured to them – and his hundreds of still photographs – literally hundreds of times. This experience is readily evident in The Great White Silence. The intertitles chat to us in familiar style; Ponting (the titles are written as though it is he speaking to us) points out things for us to look at, his words guide our eyes and our thoughts. He knew how to engage an audience, and he suceeded all over again in 2010. The film is a mixture of footage, photographs and intertitles, and is in effect a lecturer’s show with his words transferred to the intertitles. The slideshow effect reaches its height in the last half hour of the film, when there is no more footage (because Ponting did not travel with Scott into the Antarctic interior) and so all that he can use are photographs, passages from Scott’s diaries, and quaint but moving model animations showing ant-like sledges moving over the polar wastes. Scott’s diaries have barely lost their power to move even in this cynical age, and the film’s ending left the audience breathless, the final scenes accentuated by a solo voice singing ‘Abide with me’.

Ah yes, the music. The film was accompanied by a ‘soundscape’ by composer Simon Fisher Turner which combined strings (more plucked and scraped than bowed) with electronica, gramophone recordings from the time, recordings of banjo music, Terry Riley-ish sequenced keyboard music, singing, and at one disconcerting point a modern voice speaking in Scott’s hut from earlier this year. You can experience some of the electronica on the YouTube clip at the top of this post. The ‘music’ was clearly greatly appreciated by many in the audience, so I shall refrain from commenting as severely as I might. I shall say just this – the point of musical accompaniment for a silent film is to draw attention to the film, not to draw attention to the music. I’m all for imaginative forms of silent film presentation, but last night’s accompaniment drew far too much attention to itself.

The BFI Live channel has a fascinating short documentary on the technicalities of the film’s restoration. (It’s also available on yourdiscovery.com)

Some of the text of this post is adapted from an essay I wrote, The Great White Silence: Antarctic Exploration and Film’, in South: The Race to the Pole (London: National Maritime Museum, 2000).