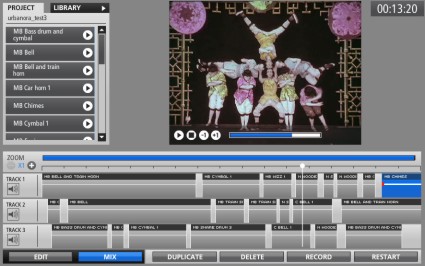 Now this is fun. Europa Film Treasures, the online collection of film titles from archives across Europe created by Lobster Film Productions has introduced a new online tool, Sound Workshop, with which you can produce your own soundtrack for one of their silent films.

The site (developed in partnership with Court-Circuit, an Arte programme dedicated to short films) is a free service that offers you clips from seven films on the Europa Film Treasures site. You can then select from a wide range of sounds (under four categories: cartoon, sound effects machine, natural or science fiction), music (three ragtime tracks only) or sounds that you have uploaded yourself (if you have registered with the site). Sounds available include birds singing, car horns, percussion instruments, water running, whizzes and whooshes, fire alarms, telephones, doors opening, boings and crashes. Having made your selection, you are presented with a sound mixing page (see above) where you can drag and drop your sounds onto three tracks. Anyone can select the sounds and play back the finished video, but only registered users can save the results and have it made available on the site’s gallery.

The Bioscope had a go with a short sequence from Les Kiriki – Acrobates japonais (1907), a marvellous trick film with gorgeous stencil colour by Segundo de Chomón featuring a troupe of acrobats achieving impossible feats. My efforts aren’t going to put any silent film musician out of a job, but you’ll get the idea (it’s listed under Urbanora), or test out the interesting range of efforts from other users available on the gallery and add comments if you feel so inclined.

Should you want to have a go yourself, do note that the films take a little while to load before you can start playing with them. You can test the sounds beforehand by clicking (and holding down the click) on the arrows for each sound option, and having played back the results you can re-edit before recording. When you have made a recording it doesn’t appear automatically on the site – it took some hours for my video to be published, probably because I created it late in the evening. It appears that the work is done by real humans (‘your results will be put online by our team soon’ it says when you have clicked ‘record’), which seems bizarrely laborious in this day and age. Also I submitted more than one video, but only one made it to the gallery. It all feels a little bit uncertain.

Sound Workshop is a bright idea, if a little creaky in execution. Nevertheless, praise is due once again to the consistently imaginative folk at Lobster for coming up with a new way to engage audiences with silent films and to demonstrate just what new opportunities exist for such content once it exists in digital form and online.