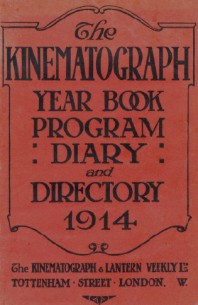 Here’s some really welcome news from those sterling people at the British Film Institute. The BFI National Library has started digitising some key reference works that either are BFI-produced or sufficiently ancient enough to be out of copyright. They are being made available as PDFs and are free for anyone to download. Top of the pile and particularly pleasing to see is the Kinematograph Year Book for 1914. The Kine Year Book (The Kinematograph Year Book Diary and Directory, to give it its full name) was one of two British film trade annuals established before the First World War, the other being the Bioscope Annual and Trades Directory, first published in 1910. The Kine Year Book was established in 1914 to accompany the Kinematograph & Lantern Weekly trade journal and is an invaluable directory of the British film business, listing every producer, distributor, equipment manufacturer, cinema, representative body and much more, in the country. It’s necessary to qualify that a little, because the existence of two film trade year books meant that some businesses registered with one and not the other, but you are not going to miss much. It also supplied a detailed account of the previous year’s activity in British film (in this case 1913). Here’s a list of the book’s contents:

A slight downside is that the book has been digitised as plain images i.e. without any word-searchability, which is a great shame. it is to be hoped that the BFI can revisit the digitisation with fresh software to make the ebook all the more useful to researchers – and to do the same for any other silent era books is has in the pipeline. However the individual section are bookmarked in the PDF, which is a help.

Among the other publications the BFI has made available, do look out for Linda Wood’s British Films 1927-1939, a key catalogue and statistical information source for the period, originally published in 1986 (and much used by me ever since). The other books and booklets that have been made available this way are:

The Kinematograph Year Book 1914 is available in PDF format, size 30MB, and has been lovingly placed in the Bioscope Library.