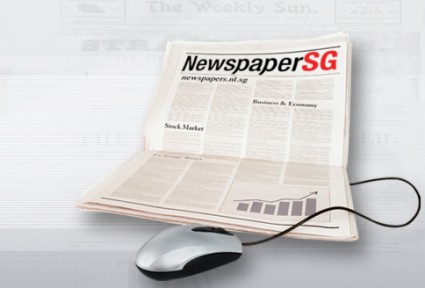 It’s been a while since the Bioscope covered a digitised newspaper collection. Since we wrote about The Times, The Guardian, New York Times, and about collected archival databases such as France’s Gallica, Austrlian Newspapers, New Zealand’s Papers Past and the UK’s 19th Century Newspapers, more digitised newspapers have become available. Our long-promised round-up of these will get produced one of these days, but you can always check the Wikipedia list of online newspapers or the handy International News Archives on the Web.

One resource I’ve not covered previously is NewspaperSG. I stumbled across it quite by accident the other day, and was amazed first to find digitised newspapers from Singapore and Malaya dating from the early years of this century, and then to find such interesting material there that relates to film.

Feature film production only began in Malaysia and Singapore in the mid-1930s, but there was a history of film exhibition that went back to 1896. One of the treasures of the NewspaperSG site is a report on the inaugural exhibition of the Edison Kinetoscope in Singapore, reported on by the Straits Times on 13 July 1896:

Dr. Harley, the entertainer, ventriloquist, illusionist, and electrician, has brought the novelty of which the reading and scientific public have heard and read so much, viz., the novelty that Edison failed to finish in time for the Chicago Exhibition, and which he calls the Kinetoscope. It is in the shape of an upright hardwood pillar letter-box, being square instead of round, having a hooded slit in the top and a magnifier beneath, through which the beholder views the scene to be enacted.

The writer goes on to describe the film Bar Room Scene, then adds:

It should be understood that this is not an imaginary scene from the brush of an artist, but is an accurate photograph of a scene that has taken place … Dr. Harley will lecture and exhibit the machine at Messrs. Robinson’s music store from 10 till 5 to-day and Tuesday. Only a limited number will be able to view it as his accumulators are running low and he will not get them filled in Singapore.

There is so much information here, from the showman Dr. Harley, to the intelligence that Edison did not exhibit the Kinetosope at the 1893 World’s Fair (many a history still states the opposite as a fact, but they knew better in Singapore in 1896) and the revealing information about the lack of an electricity supply in Singapore in 1896.

A quick browse through the site using some likely keywords reveal an advertisement telling buyers to beware of buying bioscope projectors that were not proper Bioscopes (Straits Times, 25 October 1902); notices of the exhibition of Japanese films in 1907 (Eastern Daily Mail and Straits Morning Advertiser, 23 October 1907); an interview with Maurice Bandman, a leading cinema and theatre entrepreneur in India and East Asia, about his Shakespeare productions and connections with Kinemacolor (Weekly Sun, 30 September 1911); many hundreds of cinema programmes, such as that for the Harima Hall Cinematograph, which showed Zigomar v Nick Carter, film of ‘The Balkan Crisis’, Vitagraph’s Justice of the Sage, Edison’s The Living Peach and a Gaumont Graphic newsreel, issue number 41 (Straits Times, 12 November 1912); and opinion pieces on what Singaporean audiences liked and did not like (Straits Times, 22 October 1930). As well as information on screenings in Singapore, then is plenty of information culled from British and American journals, ensuring that local cinema-goers were kept up-to-date with the latest Hollywood gossip.

Many of the reports are quite short (one of the commendable things about the resource is that the search results list tells you how many words are in each article) but the wealth of documentary evidence about what was being seen in Singapore in the silent era is considerable, and practically every search term yields many hits. The resource itself is plain in style but helpfully put together. There is an advanced search option which allows you to narrow down researches by date, newspaper (there are seventeen on offer ranging 1836-2006) and content type (article, advertisement, letters etc.). There is also a fuzzy search option. The results page gives you title (hyperlinked to the article itself), newspaper, date, page, a portion of the OCR text (with plenty of errors, beware), word count and links to a full page view and a table of contents for that issue of the newspaper (a very nice feature). All of the digitised documents are heavily watermarked (though quite legible).

The early cinema in Singapore and Malaya is not going to be of abiding interest to most, but it is further and rich evidence of the rapid spread of motion pictures into every corner of the globe. It’s also a site that’s just a pleasure to browse.